A fellow blogger visited Kinzua Bridge State Park earlier this year. Yesterday, he posted a photograph of what remains of Kinzua Bridge after it was hit by a tornado. When I discovered that my blogging friend had not seen Kinzua Bridge prior to the tornado strike, I realized the subject of my next blog post. Greg and Dawn, I want to share the marvel of Kinzua Bridge with you as well as with my other readers.

Kinzua Bridge State Park is located in Pennsylvania four miles north of U.S. Route 6 at Mt. Jewett on State Route 3011. (“B” marks the spot on this map.)

The park contains 316 acres in McKean County and features the remnants of a railroad bridge (viaduct) that had been designated as a National Engineering Landmark. When Kinzua Bridge was built in 1881, it was the world’s highest and longest railroad bridge at 301 feet tall and 2053 feet long.

I visited Kinzua Bridge State Park for the first time, with Bob, in May 1998. We visited the park once again in October 1998.

In September 2001 Bob and I visited Kinzua Bridge State Park with our exchange student from Germany.

In August 2002 an engineering inspection of the viaduct revealed potential problems with the structural integrity of the supporting piers, so the viaduct was closed to all access. Therefore, when Bob and I visited the park in October 2002 with Leo, our exchange student from Brazil, we were not allowed to walk across the viaduct or hike below it. We could, though, still view the bridge from the observation deck adjacent to the bridge.

Bob and I in October 2002
Kinzua Bridge in background

On July 21, 2003 a tornado caused the center section of the Kinzua Bridge to collapse. Kinzua Bridge State Park was closed so that cleanup and damage assessment could take place. The park was reopened on August 1, 2003. Bob and I visited Kinzua Bridge State Park on June 20, 2004 — the first time that I had been to the park since the collapse of the bridge almost 1 year ago. I was in awe of the damage done by the tornado and the amount of cleanup that still needed to be done. 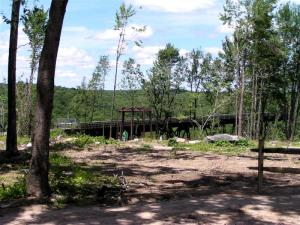 No trees obstruct view of bridge from parking lot.

We returned to the park in July 2005 with Bob’s sister and her husband. The damage caused by the tornado was still very much in evidence.

Kinzua Bridge State Park is still a prime spot for viewing fall foliage. I am thinking that the park may be one of our destinations this year for an autumn motorcycle ride.