This past Saturday, March 27, Bob and I visited the Pittsburgh Zoo & PPG Aquarium with my brother, Jim, and some members of his family. Bob and I arrived at the zoo around 9:50 AM. Jim, Judy, Kaleb and Anna arrived about an hour later. Jim and Judy’s son, Jared, joined us about 30 minutes later.

Jim and Judy with their grandchildren, Kaleb and Anna at entrance to zoo

I am so happy that Jim and Judy brought Kaleb and Anna to the zoo. It was great spending time with them and seeing the zoo through their eyes. By the way, did you know every animal in the zoo is called “doggie”? That’s how Anna referred to each animal that we saw. Both Kaleb and Anna behaved well at the zoo. There were two things about the zoo, however, that Anna did not like — the escalator and a glass cleaner inside the aquarium.

You have to ride an elevator or go up this big escalator to get to the main zoo area.

Judy, Jim, Kaleb and Anna on escalator
Anna did not like riding the escalator.  She cried the whole way up to the zoo. 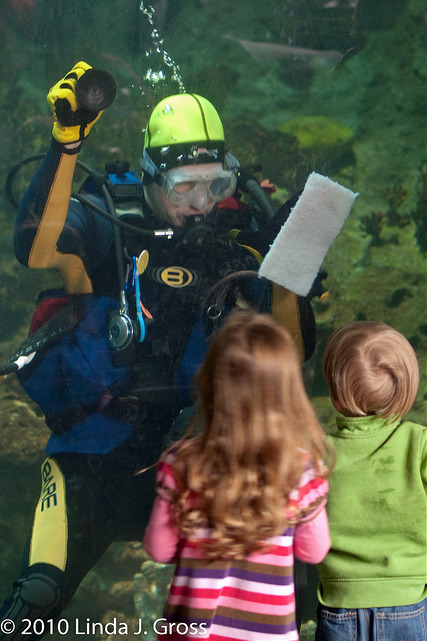 Inside one of the large floor to ceiling aquariums was this person who was cleaning the glass. This person frightened Anna when he waved at her. Anna cried and wouldn’t stop until we left the aquarium. I was carrying Anna as we left the aquarium. She kept looking behind her as we walked. I wonder if Anna was making sure that scuba-clad person wasn’t following her?

We had a great time at the zoo and hope to visit again someday.

7 Responses to “Weekend in Pittsburgh – Visit to Zoo, Day 2”