On Wednesday, April 7th, Valerie C. and I visited the Audubon Center and Sanctuary in Jamestown, New York. We arrived shortly before 10:00 AM and didn’t leave until around 1:00 PM. There are three trails at the Audubon Center. We walked part of each trail. We saw geese, an eagle (too far away for a good picture), ducks, various birds, reptiles and amphibians. Valerie saw a deer. She caught a glimpse of its white tail, as it passed in front of us a good ways down one of the trails that we were walking.

These are two of the many geese that we saw on our nature walk.

This snake was lying curled up on top of a low bush. We wondered if it was dead. We passed by it again towards the end of our walk. The snake was still lying on top of this bush; however, it had changed its position. No, it wasn’t dead! After seeing this snake the first go-around, we saw three more snakes!

We were walking on this boardwalk a short time after taking this picture. At the same time that I noticed on my right what appeared to be a long snake curled up on top of a low bush, Valerie saw a snake in the water to her left. These snakes were much closer to where we were walking, and I raised my camera to take a picture of the one closest to me. The plan was to take the picture and get the heck out of there! As I raised my camera, the snake uncurled. It wasn’t one snake; it was two snakes! They looked as though they were slithering, quickly, towards me ONTO the boardwalk! I didn’t give it a second thought. I touched Valerie’s shoulder, said emphatically “they’re coming!”, and pushed my hand gently on Valerie’s shoulder. It didn’t take much to get Valerie moving. We both made quick steps forward, all the while watching behind us. The snakes didn’t go on the boardwalk; they slithered into the water. Seeing four snakes during one nature walk was more than enough for me! I really wasn’t that pleased when we saw that first snake. At least that one was farther away, and it wasn’t moving!

I think this is a toad, as it appears to have a bumpy skin. This was the only amphibian that we saw. We heard lots of them singing or as they jumped into the pond when we walked by. We didn’t see any turtles. We kept looking for turtles because I had hoped to take a picture of several of them sunbathing on top of a log or a rock.

This bridge caught my attention. I loved the reflection of the bridge in the pond.

While we walked through the forest, I smelled Spring … an earthy fragrance.

I tried to capture the smell of Spring in this photograph.
Can you smell the earth?

Before leaving the Audubon Center we visited the eagle called Liberty. I took a picture of her screeching. Neither Valerie nor I had heard an eagle’s cry before. That was so cool! 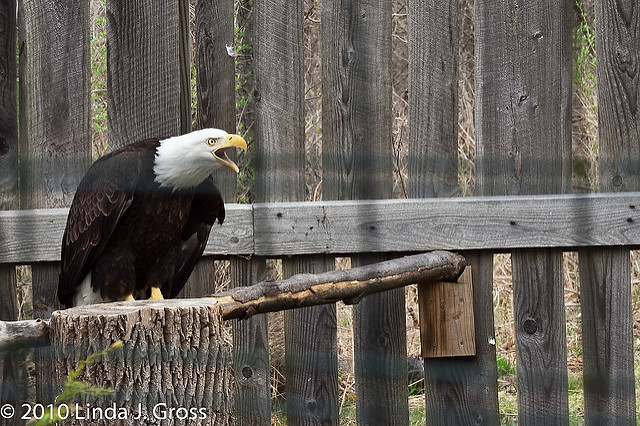