This post continues details of our driving tour of Kohala, which we enjoyed on our fourth day on the island of Hawaii (Thursday, May 20th). Our first stop was at Manini’owali Beach. Our second stop was in Kawaihae at the Pu’Ukohola Heiau National Historic Site. Our third stop was at Lapakahi State Historical Park. Our fourth stop was at King Kamehameha’s birthplace. Our fifth stop was at the Pololu Valley Lookout. Our sixth stop was in Kapaau.

It would be difficult to miss Kapaau’s main point of interest — the King Kamehameha Statue. The statue towers over Route 270.

The King Kamehameha statue has an interesting history. According to a Wikipedia article, the statue had its origins in 1878 when Walter M. Gibson, a member of the Hawaiian government at the time, wanted to commemorate the 100 year discovery of Hawaii by Captain Cook. The legislature appropriated $10,000 for the project and made Gibson the director of the project. Gibson contacted Thomas R. Gould a Boston sculptor living abroad in Florence, Italy to create the statue. In 1883 the statue was placed aboard a ship and headed for Hawaii. In the proximity of Falkland Islands the ship wrecked and with it the statue. The Hawaiians, however, had insured the statue for $12,000 and Gould rushed to complete a second. Before the second statue could be sent the original was recovered by some Falkland Islanders. They sold the statue to the captain of the wrecked ship for $500. The captain, in turn, sold the statue to Gibson for $875. The statue that stands in Kapaau is the original statue. The re-ordered statue stands in front of Iolani Palace in Honolulu, Hawaii.

My sister-in-law emailed a photograph to us a week ago. Dorothy and John returned to Kapaau on June 12th. Kamehameha Day is celebrated on June 11th. On that day the King Kamehameha statue is draped in lei.

Dorothy took this picture of the King Kamehameha statue. The statue is draped in lei on Kamehameha Day, which is celebrated on June 11th.

After photographing the King Kamehameha statue, we walked across the street to an ice cream store. We sat outside the store and enjoyed various flavors of ice cream.

After eating our ice cream, we drove a short distance farther on Route 270 to the picturesque St. Augustine Church.

I don’t convert many photographs to black and white; however, this photograph seemed to lend itself to the conversion quite well. 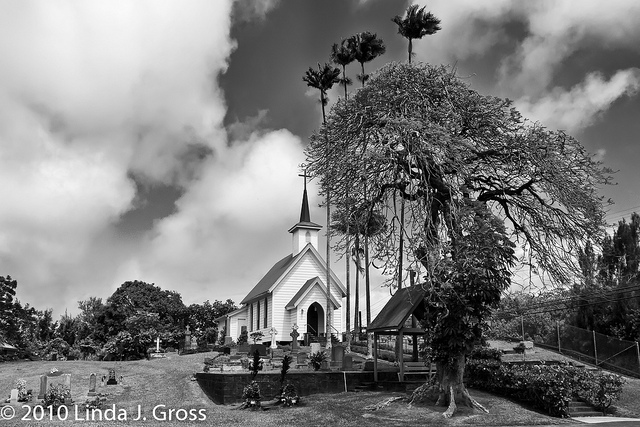 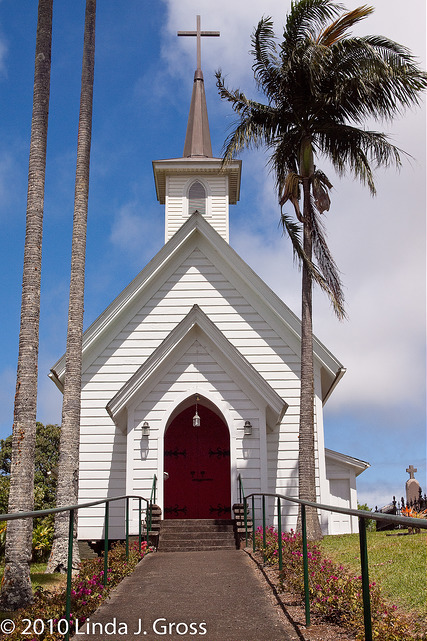 This walkway led to the church’s front door. 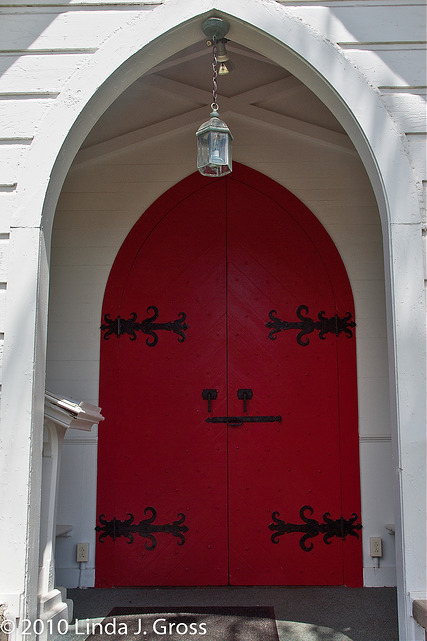 I walked inside the church. 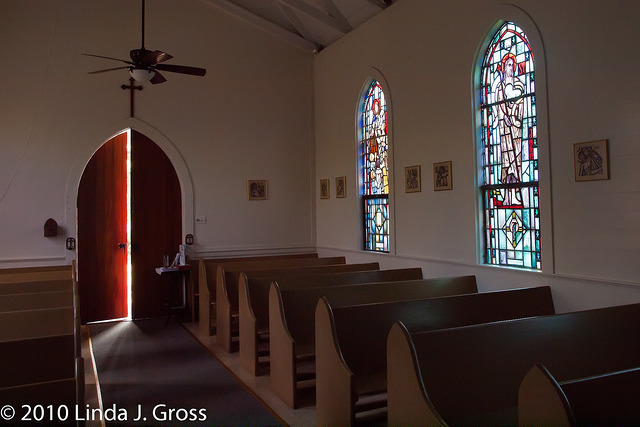 This photograph of the church’s interior was captured without flash. To do so I raised the ISO to 1600.  I like how the light is streaming through the slightly ajar door and how well the stained glass windows show up.

After exiting, I walked completely around the church. The enclosed cemetery plot, with the side of the church as a background, attracted me.

This beautiful stained glass window was to the right of the windows in the photograph shown above.