It isn’t odd for me to be awakened at night. I am a light sleeper. However, it is unusual to be awakened by thunder, lightning AND blowing snow! This oddity happened around 1:30 this morning for about 20 minutes. The thunderstorm heralded in much colder air and a major snowstorm. 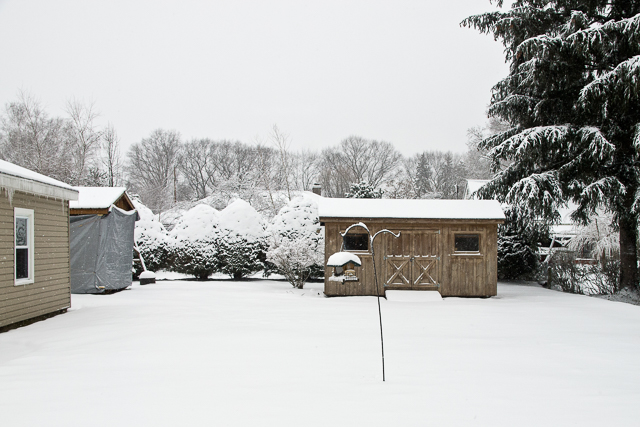 This is what our back yard looked like around noon today.

I took the yardstick out and measured the snow in our front yard. As of 1:30 PM, there is at least 6 inches snow accumulation on the ground. Another 2-3 inches of snow accumulation is expected by this evening. Then another 6-10 inches of snow is likely tonight and Saturday. At the moment there is a lull in snow activity. Snow is falling, but lightly. Periods of heavy lake effect snows are expected later today through much of Saturday, as the wind shifts to a more westerly direction and carries significant moisture inland from Lake Erie.

My niece’s baby shower is tomorrow afternoon. It is a 2-hour drive from my house to the location of the baby shower. I have a big question mark right now because of current and anticipated weather conditions, as to whether or not my stepdaughter and I will make it to the baby shower.

We have had a mild Winter thus far. We have had only one Winter storm this season that resulted in measurable snow. We received under 6 inches of snow from that storm. We knew it was only time before Old Man Winter would release his fury on us!