Bob and I celebrated my birthday (February 23) in Niagara Falls.

We opted to spend the night in Niagara Falls, rather than drive up and back the same day.  We spent the night at Comfort Inn The Pointe in Niagara Falls, NY.  The hotel is centrally located.  We were one block from the Seneca Niagara Casino, and the entrance to Niagara Falls State Park was right outside our front door.  We were within walking distance of several restaurants, both in New York and in Canada.

Soon after checking into our hotel, we went for a walk.

This mural was painted on the side of a building near our hotel.
Can you tell how happy I was to be in Niagara Falls on my birthday?

We went for a short walk to Prospect Point, where we viewed the falls from two different vantage points. 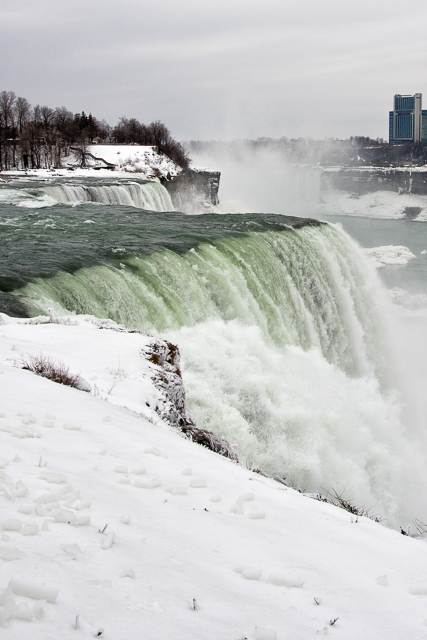 Vantage Point 1 was at the brink of American Falls.

Vantage Point 1 was at the brink of American Falls.

Vantage Point 2 was the view of the American and Horseshoe Falls from the Observation Tower.

We went for a short walk because it was lunch time, and we were hungry.  We ate lunch at the Hard Rock Cafe.  While we were eating lunch, Bob asked if I wanted to walk over to Canada.  I thought it a good idea; however, we did not bring our passports with us.  Well, little did I know!  Bob did bring the passports with him.

After lunch at the Hard Rock Cafe, we walked across Rainbow Bridge into Canada.

American Falls and the Observation Tower 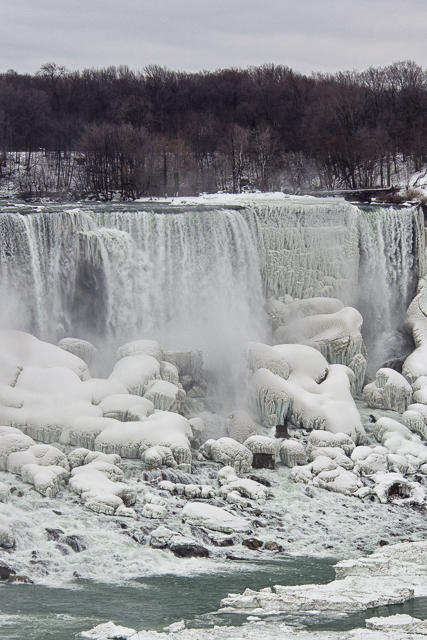 So, Saturday was my birthday.  Are you wondering how old I am?  In Canada, after taking a couple photographs of the falls, Bob and I walked toward the corner of Clifton Hill and Falls Avenue — the location of a clothing store in which I wanted to shop.    As we approached a crosswalk, a lady caught my eye and smiled at me.  When I smiled back at her, she told me that she liked my hat.   The three of us ended up walking in the same direction for a while.  I learned that she was from Australia and in Canada on business.  She thought Bob and I were from Canada because of the hat I was wearing.  I told her that we were from Pennsylvania and that we purchased the hat in Canada.  In fact we were on our way to the clothing store in which I purchased the hat.     I also mentioned that we were spending the night in Niagara Falls to celebrate my birthday.  She asked me how old I was.  When I told her that I was 57 years old, she did a double look at me.  “No”, she said; “you don’t look a day over 40!”  Such a sweet lady! 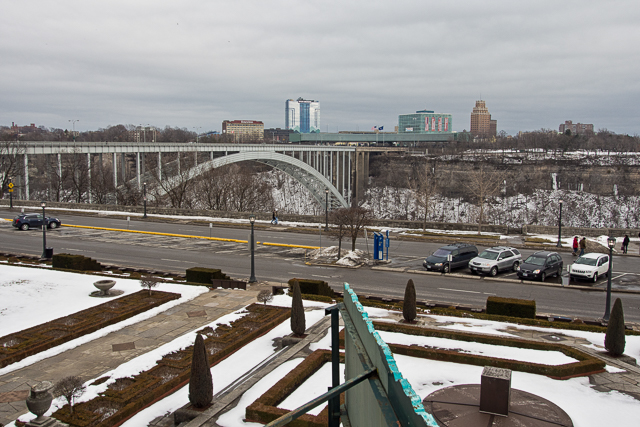 The bridge you see is the Rainbow Bridge.
The tall building to the left of the bridge is the Seneca Niagara Casino.
Our hotel was to the right of the bridge, near the tall brown building. 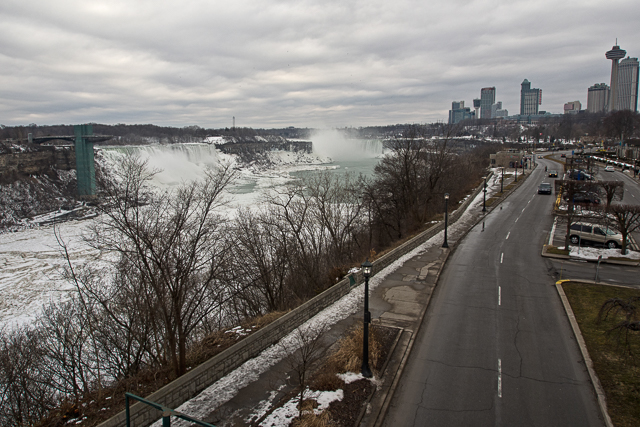 One last glimpse of the American and Horseshoe Falls

Bob took this photograph of me, soon after we returned to New York.
It had been at least a couple hours since we had sat down.
It felt good to sit!

Later in the day we walked to the Seneca Niagara Casino.  I had hoped for some birthday luck.  No such luck.  The one-armed bandits were not kind to us.

We ate dinner that night at TGI Friday’s.

Bob spoiled me very well for my birthday by spending the night in Niagara Falls with a birthday lunch AND a birthday dinner.  I am a lucky girl to have such a sweet man for a husband.  Thank you, Bob, for a wonderful birthday weekend!

5 Responses to “My Birthday at Niagara Falls”