Bob and I spent Tuesday, September 17, in Nags Head, at the beach house.  It was a very windy day.

I enjoyed watching the waves crashing on the beach.

The pirate flag at the beach house next to ours was fully extended in the gusty winds.

The strong winds blew the sand onto our beach access.

I took a chance with my camera, taking photographs outside with the wind and blowing sand.  I got lucky, though.  The sand wasn’t blowing at me in the morning hours, and I was able to capture some photographs and video from the beach access.   Later in the day, the sand was blowing so badly that I didn’t go anywhere near the beach with my camera.

The wind knocked down the beach chairs. 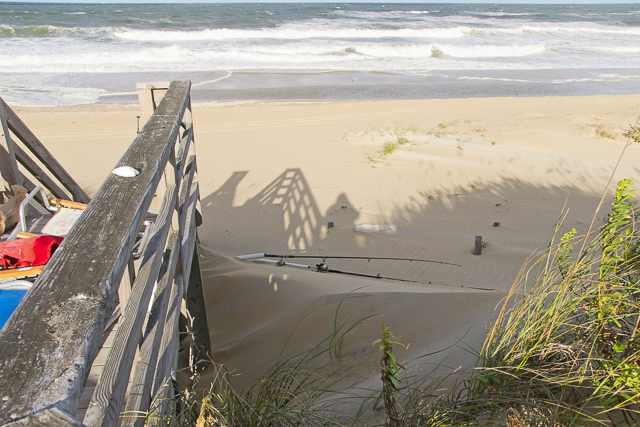 The wind knocked down Ed’s fishing poles too.

Ed  and Scott, who was visiting for the day, braved the blowing sand to secure the fishing poles.

As the sun began to set, it cast a golden glow on the ocean waves and dune grass.

Sunset over the Sound