Laney, one of my Facebook friends who I met at the Benezette Elk Camera Club picnic earlier this year, shared photographs on Facebook of the ruins of Austin Dam on Saturday.  Neither Bob nor I had heard of Austin Dam.  Laney’s photographs piqued my interest.  I looked up the location of the dam and learned that it was about a 1 1/2-hour drive from our house.  We made a spur-of-the-moment decision on Sunday morning to go see Austin Dam.

We left Warren at 8:00 AM.  We found Austin without any problem.  Austin Dam is located along Route 872 between the Pennsylvania towns of Coudersport and Austin.  Here is a map showing how to reach Austin Dam Memorial Park from Austin.

I would recommend that you use the route found in the map above to go to Austin Dam.  We turned onto Turner Road from Route 607 but did not make the right turn on Elliott to Route 872.   Instead, we drove straight ahead on a narrow, dirt road that was full of pot holes.  The road we traveled on doesn’t appear on the map at all!  The dirt road took us to an overlook of the dam ruins.  If we had followed the route shown in the map above, it would have taken us to the overlook as well.  We would still have driven on the narrow dirt road with lots of pot holes; however, we would have been on that road a lot less time!

This is the history of Austin Dam, according to a Wikipedia article:

“In 1900, Bayless Paper chose to construct a paper mill in the Freeman Run Valley. By 1909, the company realized that occasional dry seasons required a more reliable water source. After finding a small earthen dam to be inadequate, the T. Chalkey Hatton firm built a large concrete dam across the valley. The dam was 50 feet (15 m) high, 540 feet (160 m) long and cost $86,000 to construct. It was designed to be thirty feet thick, but was built only twenty feet thick.

Within only a few months of its completion, problems were detected. The dam bowed more than 36 feet (11 m) under the pressure of the water it was holding and the concrete started cracking. The bowing was alleviated by using dynamite to blast a 13-foot (4.0 m) space for the excess water to spill over. The cracking was claimed to be normal because of the drying cement.

On September 30, 1911, the dam failed and destroyed the Bayless Pulp & Paper Mill as well as much of the town of Austin. The damage was approximately $10 million. It also resulted in the deaths of 78 people….

The ruins consist of a series of broken sections extending east to west across the Freeman Run Valley. There are five upright sections and two large and several smaller topped sections. The site was added to the National Register of Historic Places in 1987.”

I believe this sign commemorates peoples’ lives who were lost in the flood, not where the homes were located or where the people were found. There are hiking trails along the road to this overlook with peoples’ names and ages.

Sykes Vista provides a good overlook of the ruins of Austin Dam.

From Sykes Vista we drove into the Austin Dam Memorial Park.  The entrance to the park was on the left a short distance from Sykes Vista, traveling in the direction of Austin.

The following photographs were taken, while walking around the ruins of Austin Dam. 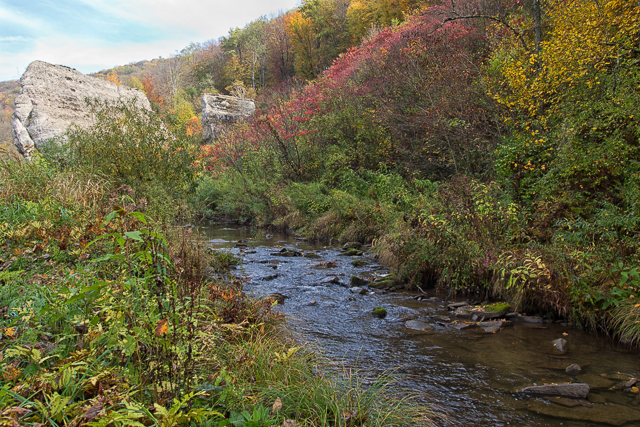 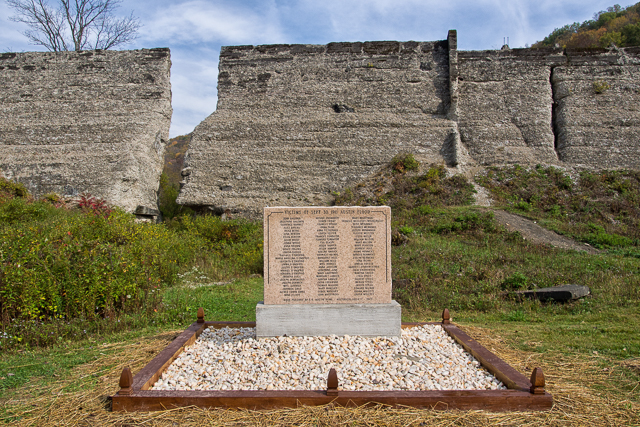 5 Responses to “Walking in Laney’s Footsteps”