We spent two nights (July 11 and July 12) in State College at the Best Western Plus University Inn & Suites. We traveled to State College via motorcycle, departing home around 10:00 am on July 11.  We checked into the hotel around 1:30 pm.  The purpose of our weekend stay in State College was to attend the Bell Family Reunion.

Bob’s sister, Cynthia, has a keen interest in genealogy.  The following information was related to me by Cynthia.  Bob’s maternal grandfather (Neil Bell) had 2 brothers, Floyd and Wallace (called Pat).   In the late 1930s, Bob’s grandparents lost everything in a house fire.  I do not know the whereabouts of Bob’s grandfather, after the house fire.  His grandmother went to work as a live-in cook for a rich family.  An accommodation was provided for Bob’s grandmother but not for his mother.   Bob’s mother would have had to quit school and go to work, but Uncle Floyd and Aunt Margaret said, no, we have five kids, what’s one more? So she went to live with them.   Bob’s mother graduated high school, while living with Uncle Floyd and Aunt Margaret.   Neither Bob nor Cynthia knew their grandfather.  It sounds like Bob’s mother and her father were estranged.  When she was young, Cynthia was told by her mother that her grandfather was dead.  Through Cynthia’s genealogy research, we learned that Bob’s grandfather actually died in 1984 and that he lived in our hometown of Warren until about 1964.   Cynthia’s genealogy research led to the discovery of Clyde, one of Floyd’s children, who lives near Warren in the city of Bradford.  Bob, Cynthia and I visited with Clyde and his wife, Lois, on November 11, 2012.   That visit led to an invitation to attend the Bell Family Reunion.  The people at the reunion were Bob’s mother’s cousins – Floyd and Margaret’s five children and their families.

The first event for this year’s Bell Family reunion was dinner at Damon’s Grill in State College. 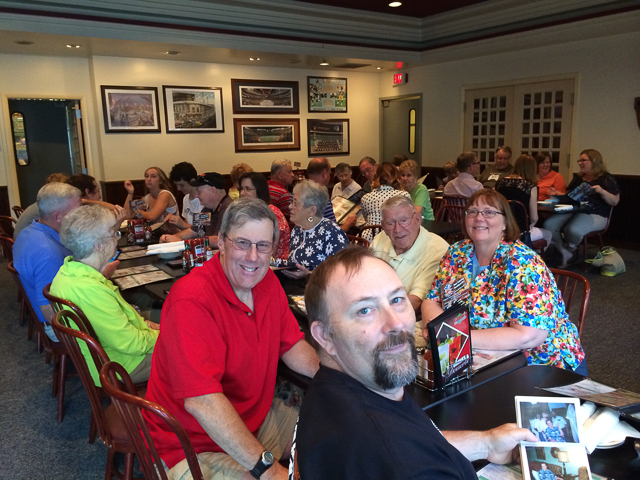 The family occupied a banquet room at Damon’s Grill.  Looking at the camera are Bob, his sister Cynthia, and Cynthia’s husband Larry.  Sitting beside Cynthia is Clyde and next to Clyde is Lois.  Clyde and Lois were the only family members whom we knew, when we walked into Damon’s.  Everyone welcomed Cynthia, Larry, Bob and I with open arms.  Dinner was at 6:00 pm. We spent the next few hours getting acquainted with our “new” cousins.

At 11:00 am on Saturday the family met at the Walker Township Park in Zion PA for a picnic. The picnic, which was catered, included pulled pork sandwiches, ham, macaroni and cheese, baked beans, watermelon, and chips. We spent about 4 hours at the park, getting better acquainted with each other. 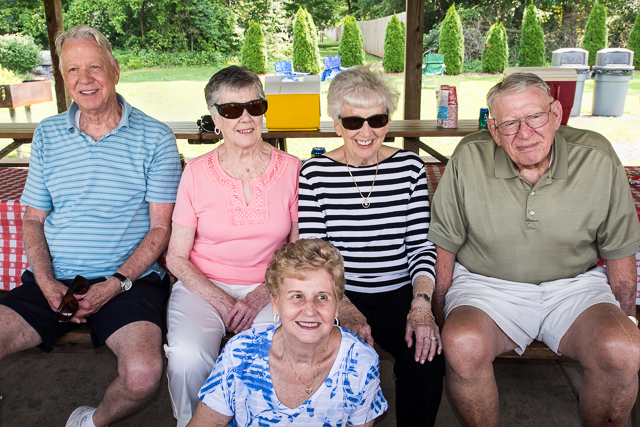 While at Walker Township Park, we took pictures of each family who attended the reunion. 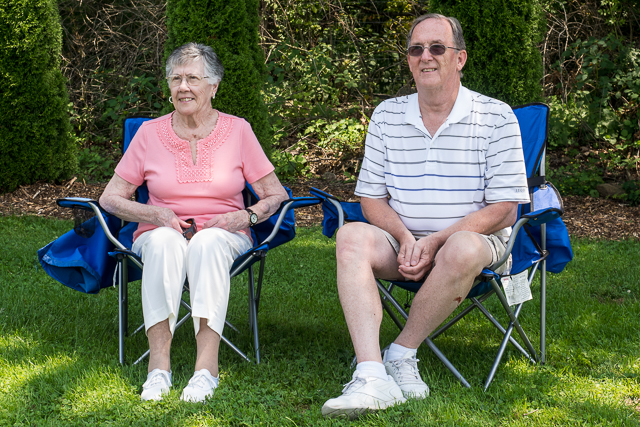 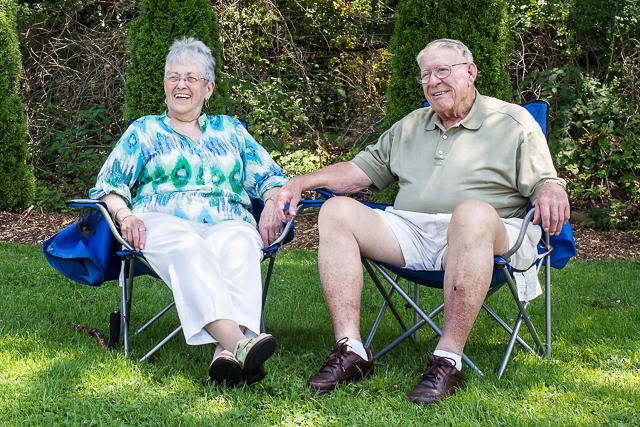 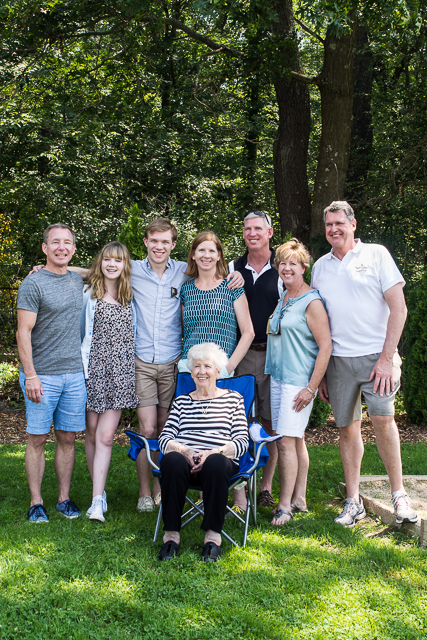 Ruth and her family 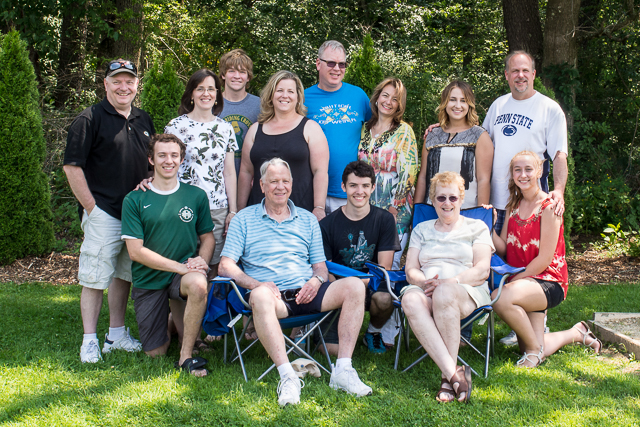 Dick and Mary Ann and their family 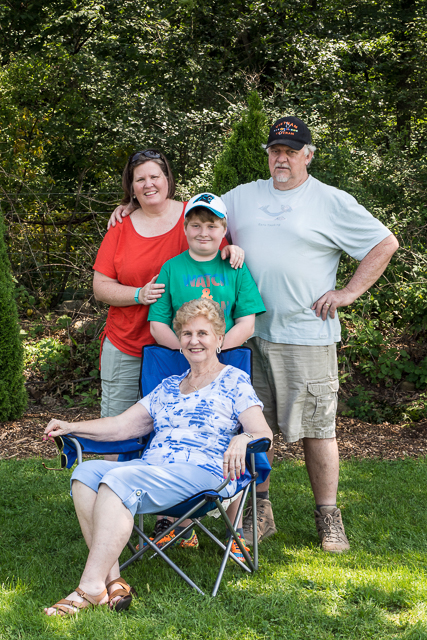 Barbara and her family 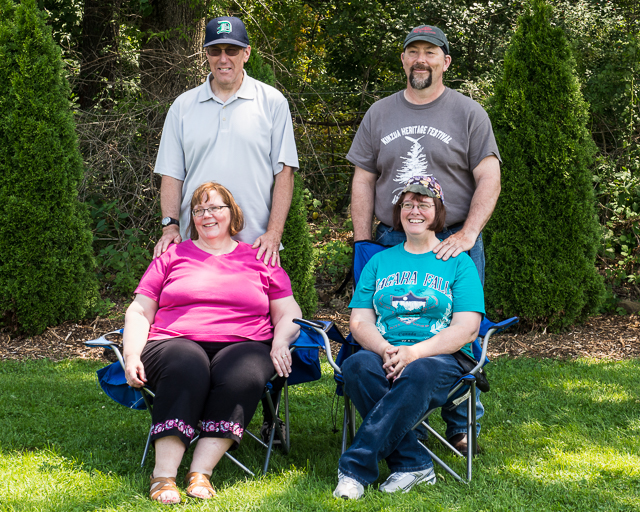 Bob, Cynthia, Larry and I

At 6:30 pm the family met for dinner at the Nittany Country Club in Mingoville PA. 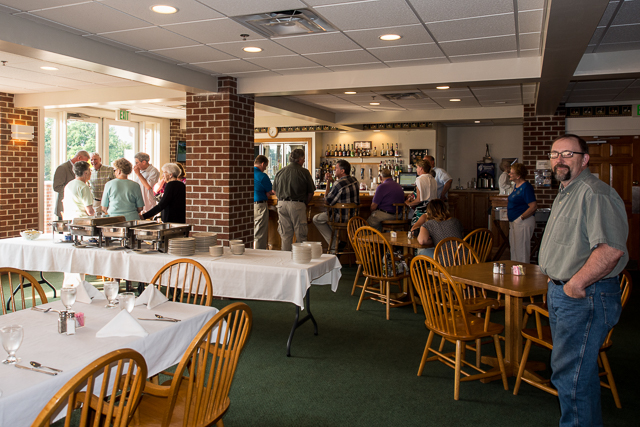 Dinner was served buffet style and included salad, cranberry relish, stuffed turkey, chicken cordon blue, green beans, mashed potatoes and gravy, dinner roll and a variety of pies and cakes for dessert.  We spent about 4 hours at the country club, getting even better acquainted with each other.

Thank you, Dick and Mary Ann, for putting together a wonderful family reunion!

On Sunday morning, before departing on our ride back home, we were able to say goodbye at breakfast to many of our cousins who had stayed at the hotel as well.  I am very thankful of Cynthia’s interest in genealogy.  Without that interest, we would never have met Bob’s cousins.  We had an absolutely lovely time at the Bell Family Reunion. In addition to meeting “new” cousins, we have gained new friends.  We plan to keep in touch with our new relatives and are already looking forward to the next Bell Family Reunion in 2016.