Bob came home from work at noon this past Friday (January 23). By 12:30 pm we were on our way to Erie, PA for a getaway weekend.

Our first photo stop was at Perry Monument. 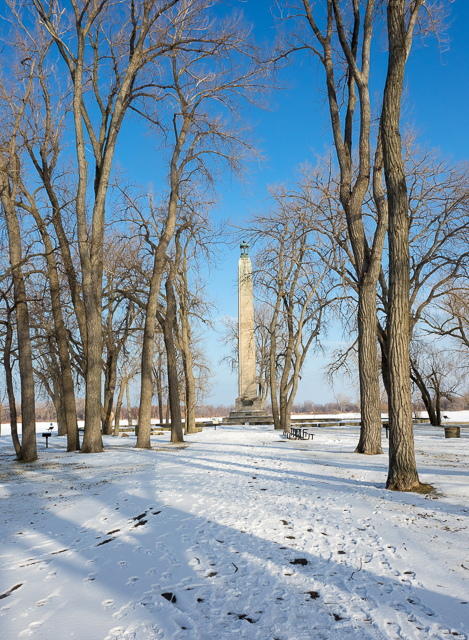 The Perry Monument commemorates the Battle of Lake Erie, in which Commodore Oliver Hazard Perry earned the Battle of 1812’s greatest naval victory.

Our next stop was at the North Pier.

Our last stop was at Beach 7 – Waterworks Beach, where we admired ice dunes from afar.

Snowy owls have returned to Presque Isle State Park.  We had hoped to spot a snowy owl. The only wildlife we saw, though, were the seagulls at the North Pier.

From Presque Isle State Park, we drove to Applebee’s for dinner. We ordered from the 2 for $25 dinner entrees. Bob ordered the Bourbon Street chicken and shrimp entree, and I ordered the Bourbon Street steak entree. For an appetizer we choose onion rings with Mexi-Ranch dressing. We each ordered a garden salad to accompany our meals. Dinner was excellent. We were pleased to find out that the restaurant is part of Scott Enterprises, which meant that the Ultimate Gift Card that we purchased in November last year paid for our dinners.

After dinner, we drove the short distance to our hotel and checked in. The Comfort Inn Presque Isle was our home for two nights.

Stay tuned.  I will write about Day 2 of our weekend getaway in my next blog post.