On Wednesday, May 13, we went to Bryson City with “Skid” and Sandy and “Lucky Al” for breakfast. “Skid”, “Lucky Al” and Bob traveled by motorcycle, with “Skid” in the lead. Sandy rode with me in the car.  There were three other motorcyclists who left A Holiday Motel with us.  I thought they were going to Bryson City as well, but they turned off at Country Vittles located within walking distance from our motel.

Byson City, NC is located a little less than 30 miles west from A Holiday Motel in Maggie Valley, NC.  It was a nice drive to Bryson City. It was the first time that Bob and I had ridden to Bryson City. Shortly before reaching Bryson City, we stopped at Two Rivers Lodge, where another rider was supposed to join us for breakfast.  “Skid” knocked on one of the hotel doors.  A man stuck his head out and said that his alarm had not gone off and that he would catch up to us later (but he never did). By the way, Two Rivers Lodge looked like a very nice hotel.  It is located alongside a river.  What I saw from the parking lot looked quiet and peaceful.

In Bryson City we ate breakfast at the Everett Street Diner. We ordered the special–2 eggs, bacon, potatoes and toast for $4.25. The food, service and company were excellent.

After breakfast, I turned my car around and waited while “Skid”, “Lucky Al” and Bob got on their motorcycles and backed out of their parking spaces.   I was watching the backing up through my rear view mirror.  I saw “Skid’s” motorcycle fall over, as he was backing out! “Lucky Al” and Bob hurried over to help, but “Skid” had the motorcycle upright before they reached him. All this happened within a few seconds.  When I found my voice, I told Sandy, who had been looking straight ahead, that “Skid’s” bike had gone down.  She was out of the car faster than lightning!  Thankfully, neither “Skid” nor the motorcycle were hurt. We returned to Maggie Valley without incident.

Soon after returning to A Holiday Motel from Bryson City, Bob and I went for a ride on the Blue Ridge Parkway to its highest elevation.

We departed the Blue Ridge Parkway via North Carolina Route 215, along which we saw a couple waterfalls. 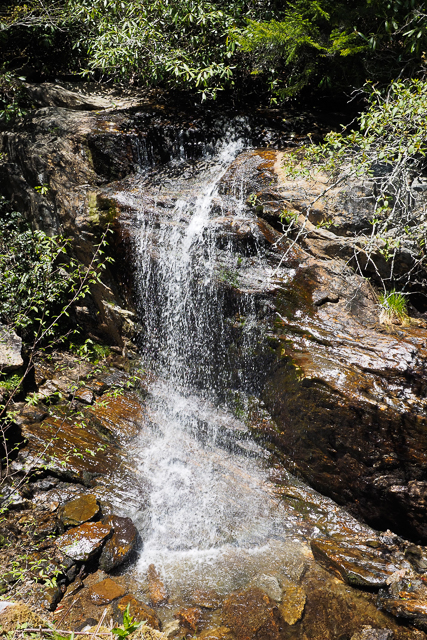 We took U.S. Route 276 into Waynesville and ate lunch at the Sagebrush Steakhouse. Bob ordered fish and chips. I ordered chicken tenders and French fries. We ordered dessert too. Bob had a peach cobbler with ice cream. I had an apple cobbler with ice cream. Our lunch was good. The service was a BIG improvement from the previous night!

We returned to A Holiday Motel after lunch and spent rest of the afternoon and evening hanging out with our VROC friends.

We went to bed at 10:00 pm. As happened the night before, I was lulled to sleep by the talk and laughter of our friends.