Our July 4th activities began shortly before 11:00 am, when we met my stepdaughter Stacey, our twin granddaughters, and Chris (Stacey’s mother) to watch Warren’s 4th of July parade. We met at the intersection of Pennsylvania Avenue and North Carver Street, at the start of the parade.

Harper and June did not stay in those chairs for very long.

The parade lasted 2 hours, and I spent most of that time sitting on the ground, cross legged, with Harper on one knee and June on the other. Stacey, Chris and Bob stood for the duration of the parade.

See the man and boy who are wearing patriotic hats? 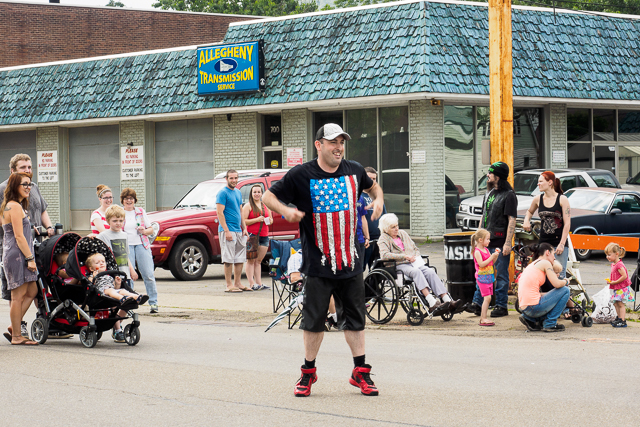 A highlight of Warren’s 4th of July parade is the candy that is tossed (and handed) to the children.  The older children in this picture went out of their way to make sure Harper and June got candy.

Neither Harper nor June like loud noises.  June is even more sensitive to loud noise.  The fire trucks hit their sirens in the parade.  You could count on June holding her hands to her ears, whenever that happened.

Harper and June liked the Zem Zem Hornets and their Go-Karts.

This was the first year Bob and I saw the parade with Harper and June. The girls liked the parade, and I am so happy that we were able to share the experience with them.

One Response to “Independence Day at Home”