Yesterday Bob and I took our granddaughters to my brother and sister-in-law’s camp, located near St. Mary’s, PA. We picked up the girls at their house at 9:00 am. It warmed my heart, when I saw Harper and June sitting on their porch step waiting for us. Stacey said the girls were very excited to go with us to camp.

We arrived at camp around 10:30 am. The drive to camp was uneventful. The girls stayed awake for the entire 1 ½ hour drive and did well entertaining themselves with the books and small toys that were available in a basket between their seats.

Harper and June’s activities at camp included swinging on a tire and on a swing; playing hide ‘n seek and story time with Kaitlyn.  A guy, who has a camp two camps up from Jim and Judy’s camp, had captured recently three rattlesnakes nearby.  I am glad we didn’t come across any rattlesnakes, while at camp! While playing hide ‘n seek, an older girl was with Harper and June at all times just in case they came upon a snake!  Another fun activity was making Styrofoam snowmen.

It was Christmas in July at camp this year.  Dinner, which we didn’t stay for, was going to be turkey and all the trimmings.

A small part of the hill across from camp was decorated for Christmas. My sister-in-law gave Harper and June a reindeer and snowman to take home, when we left camp at the end of our visit.

Oh, and I have to share a dialogue that my great niece, Anna (seen in this photograph helping Harper tie her shoes), and I had.  When Harper and June changed into their swimsuits, Judy gave each of them one of Anna’s shirts to put on as a coverup.  Anna was not around at the time.  Anna noticed Harper’s shirt later in the day.  Here’s how the conversation went between Anna and me.

Anna:  I have a shirt similar to the shirt that Harper is wearing.

Me:  Oh?  How is your shirt different?

Anna (after a short pause):  It doesn’t have a heart on it.

Me:  Do you have a shirt similar to the one that June is wearing?

We brought Harper and June’s 3 wheelers with us.  Jim and Judy had a couple 3 wheelers and a ride-on jeep at the camp.

Harper and June and these two boys had a fun time riding round and round.

We didn’t stay for dinner, but we did eat lunch at camp. 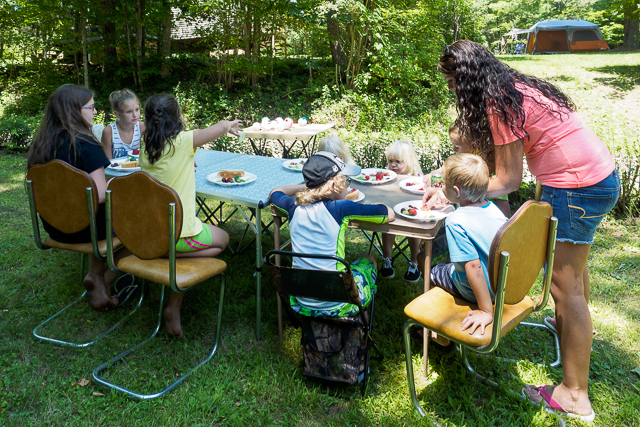 This was the children’s table.

After lunch (and changing into swimwear), we walked down to the creek.

The kids dropped their Styrofoam snowmen into the creek.

Whose snowman would reach the finish line first?

June’s snowman made it to the finish line first!

This was the second year that Bob and I have taken Harper and June to camp.  The girls were much more brave in the water this year than they were last year.

Harper and June braved the cold water and sat down in the creek!

Thank you, Amber, for helping me to keep an eye on the girls in the creek!

Another highlight from a day at camp was when Harper and June met a friendly giant. 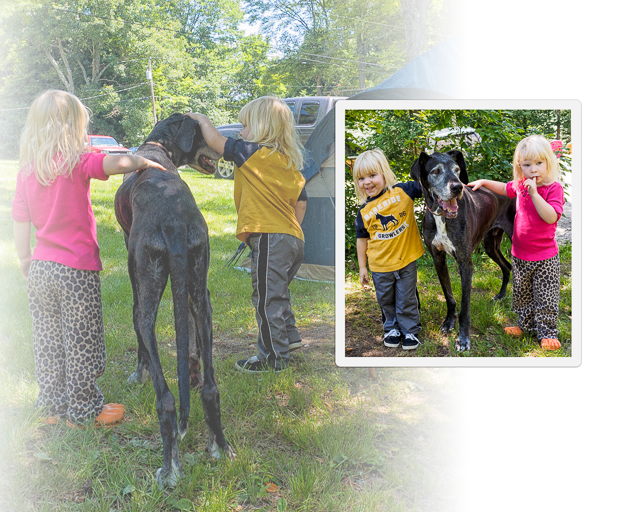 Harper and June were enamored with Troy.  I think the feeling was mutual.

We left camp around 4:00 pm and dropped off Harper and June at home around 5:30 pm.  The day at camp wore out Harper and June.  The girls slept all the way home!

4 Responses to “Day at Camp”