So far, in past blog posts, I have shared the following VROC Reunion Rally events:

This blog post provides more details about the rally and Friday’s events.

With the exception of a few hours this morning, Bob and I spent the day at rally headquarters, the Motel 62 in Eureka Springs.

Throughout the 5-day rally, the hotel parking lot is where we gathered to converse with our friends…long-time friends, new friends and friends whom we had met only via Facebook or VROC forums.  We had been Facebook friends with one VROC member for 5 years and met him and his girlfriend for the first time at the rally.  Some long-time friends we had seen recently at the SEVROC rally in May in Maggie Valley, NC.  Other long-time friends we hadn’t seen since June 2009, when we attended the Wolfman’s Wandering Rally in Richmond, KY.  The parking lot conversation runs the gamut of political talk, tall tales, catching up on family events and the telling of riding adventures.

I purchased a leather vest earlier this year.  I remedied its virgin status, while in Eureka Springs, by adding a couple patches.

This is the seamstress, who sewed on my patches.

Around 5:00 pm, we assembled for the traditional group picture.

Katie, of Ayers Open Road Photography, was the official photographer and did a great job.
Katie gave me permission to post this photograph.

After the group picture was finished, we headed over near the smokers, which had been running all day.  The smells coming from the smokers were tantalizing!

Gathering for the BBQ

Before the BBQ, though, there was a special presentation to the young man in the “Tattoed and Employed” t-shirt.  Bradley had no idea what was about to happen, when I took the picture shown above.

The Eureka Springs Fire-Rescue-EMS made the presentation.

Bradley and his dad, Jim, after the presentation

Happy 21st birthday, Bradley!
I am sure that you will have many riding adventures on your new motorcycle!

After Bradley’s birthday gift presentation, we got in line for the BBQ.  The BBQ included ribs, brisket, sausage, macaroni and cheese, coleslaw — all of which were plentiful and tasty. 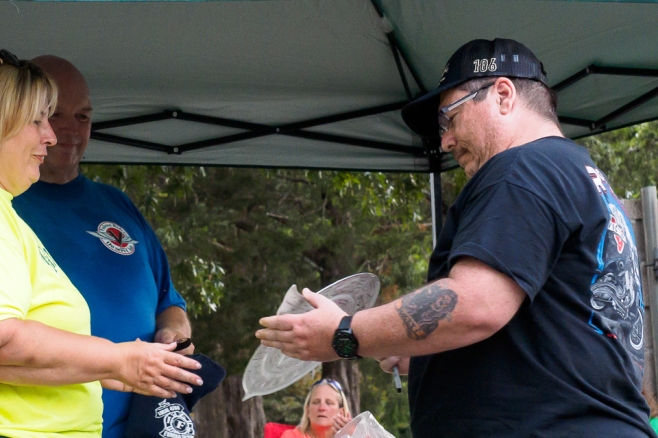 Recognizing Condi and JR for their efforts in organizing rally

Condi and JR will not be able to organize the rally next year.  Another VROC member stepped up to the plate. 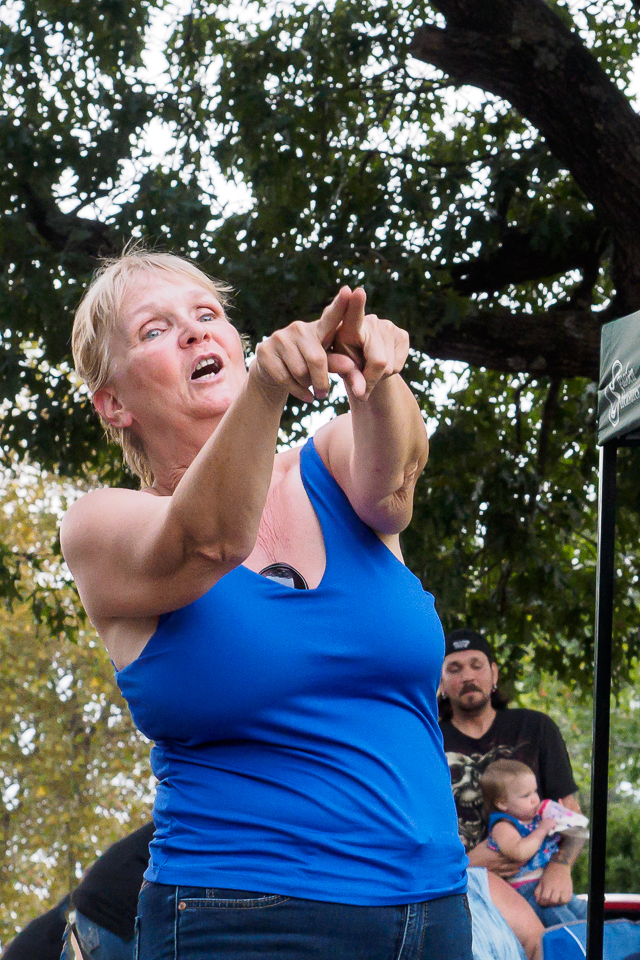 Laura will organize next year’s VROC Reunion Rally.
In this photograph, Laura was pointing to “Moon”,
who has organized the rally in the past, stating that she had offered to help.

When we returned home from Arkansas, I was curious how many years the reunion rally has been held.  I messaged Dianna “Moon” and asked if she had any idea the year that the rally was first held.  Dianna dug through her t-shirts and found one that said 10th Annual VROC Reunion Sept 16-20, 2009.  The first rally, therefore, was held in 1999.  This year’s rally is the 16th annual VROC Reunion rally.   Dianna told me that the first rally was considered the first “International Rally” because there were several attendees from Canada, one or so from Mexico, and even one attendee from New Zealand. This was the first year that Bob and I attended the VROC Reunion rally.  We hope to attend the rally next year!