Today is Day 9 of our 13-day vacation. We are in Eureka Springs, AR attending the annual Vulcan Riders and Owners Club (VROC) Reunion motorcycle rally.

Jim “Skid” invited Bob and me to join he and Sandy for lunch in Branson, Missouri.  Bob and I had talked about going to Branson while on vacation, but we had not yet made the trip.  We readily agreed to accompany “Skid” and Sandy to lunch.  We departed the Motel 62 in Eureka Springs, via motorcycle, around 10:00 am.  Our first stop was a fuel stop in Berryville, AR. 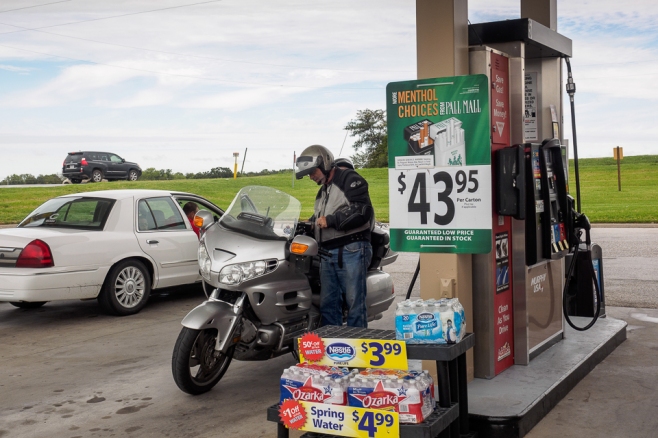 Scenery between Berryville, AR and the Missouri State Line 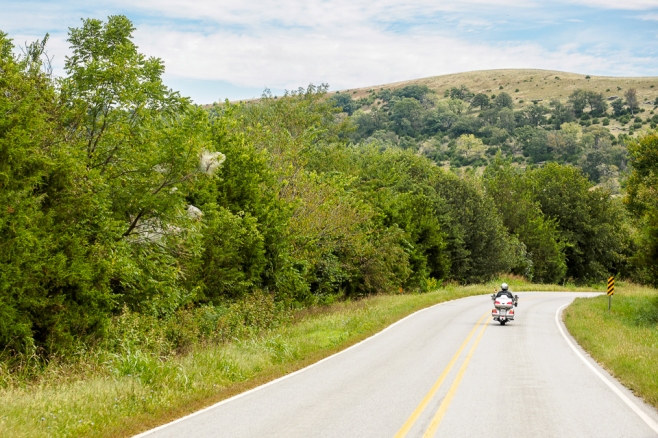 We stopped in the town of Blue Eye, where Sandy and I had our picture taken standing in both Missouri and Arkansas.

Sandy and I standing on the Arkansas-Missouri State Line 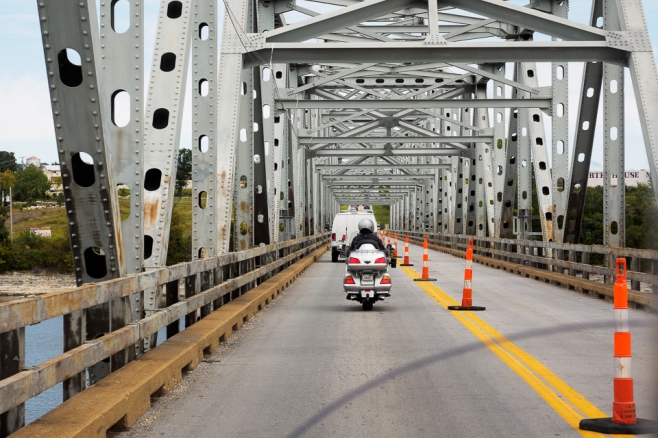 Missouri Route 76 is Branson’s most famous street, where it is known as “76 Country Boulevard”, and features many of the entertainment theaters for which Branson is famous. 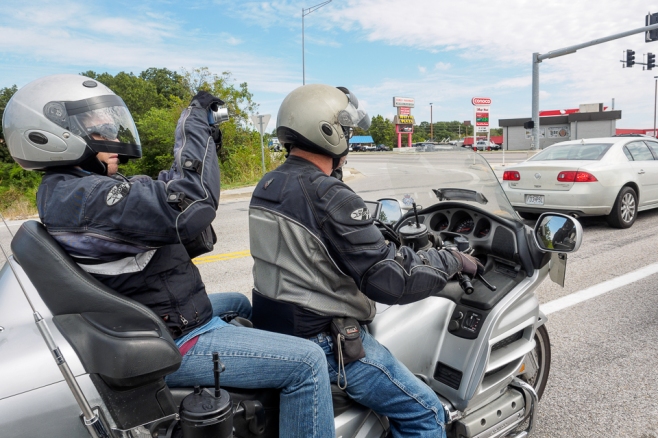 Both Sandy and I took several pictures along Missouri Route 76. 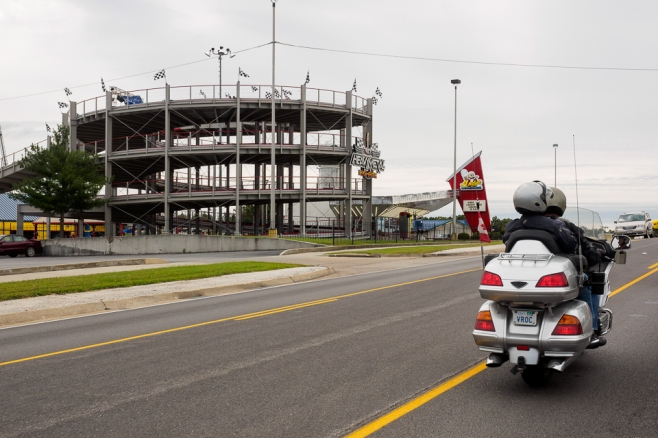 Ronald Reagan hanging out in a souvenir parking lot
The statue was located across from the Heavy Metal High Rise Go-Cart Track. 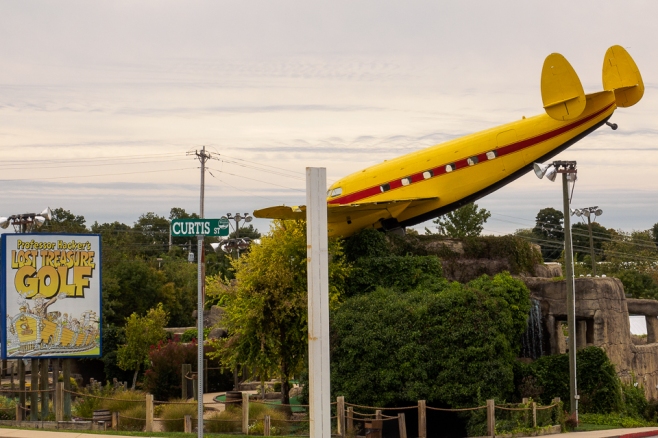 The Lost Treasure Golf attraction is two amusements in one:
a mining train that takes you to the top the mountain to the first golf course holes, and
two 18-hole miniature golf courses. 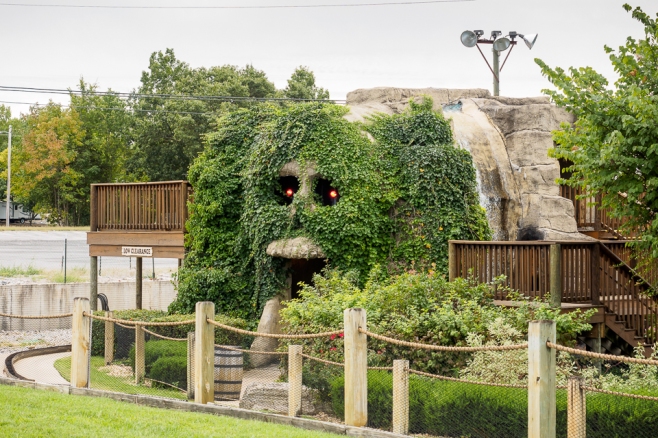 Ripley’s Believe It or Not

We ate lunch at the Jackie B. Goode’s Uptown Cafe, a 1950s style diner.

Sitting in front of the Uptown Cafe is a yellow taxi, a 1953 Henry J. Kaiser.

Sandy and “Skid” try to come to the Uptown Cafe each year, during the VROC Reunion Rally. They stayed in Branson one year and could walk to this restaurant from their hotel. The sandwiches that we ordered were good. Sandy had a root beer float too, which she thoroughly enjoyed.  I wished I had ordered a root beer float as well.  It looked really good!  The Uptown Cafe has free live entertainment, but there was no entertainment while we were there.

After lunch, we continued a short way down Missouri Route 76. We soon turned off that route and headed to the Table Rock Lake.

The Titanic Museum sat across the road from the Uptown Cafe. 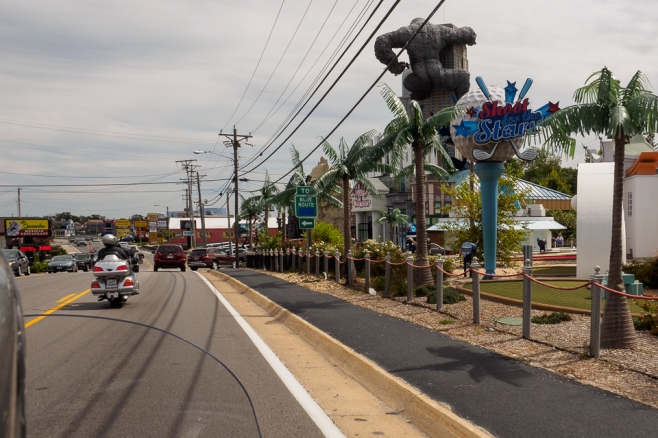 King Kong at the Hollywood Wax Museum caught me by surprise!

It looks like “Skid” was giving the peace sign to someone, as we were
passing by Baldknobbers and the Melody Lane Inn on the left.

We passed by this very big rooster, wearing a vest and bow tie. 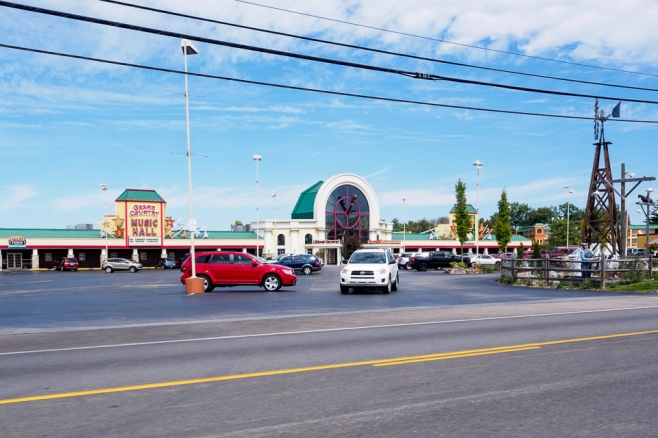 According to information that I found on the Internet, this is an outdoor mini-golf course that features life size animated farm animals, a milk shed, water tower, horse barn, ponds, windmill, outhouse and a chicken coop. Sensors bring this course to life by setting off sound effects and animations throughout the game.

We stopped briefly at the Dewey Short Visitors Center, located at the south end of the Table Rock Dam.

From the visitors center observation deck we saw the Showboat Branson Belle.

While at the Dewey Short Visitors Center, we saw a Duck bus cross over the Table Rock Dam. 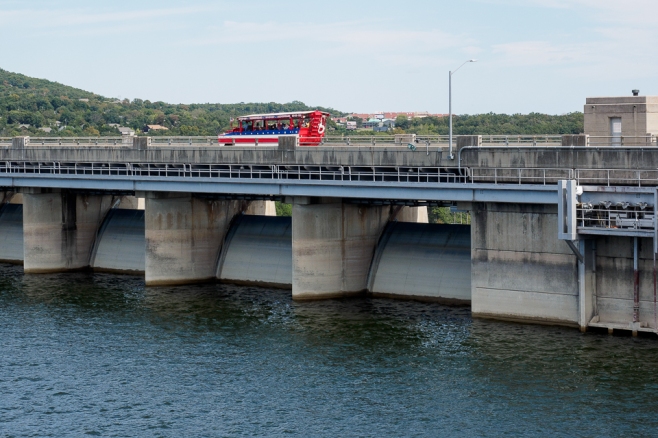 Ride the Duck bus, crossing over the Table Rock Dam
I have seen Duck buses at other places that we have visited.
I have yet to ride a Duck bus.

Here is one last picture from our day trip to Branson.  As we passed through Oak Grove, AR I happened to catch a glimpse of a picturesque shack.  This looks like an interesting stopping place…perhaps during another trip to Eureka Springs.

Thank you “Skid” and Sandy for a most enjoyable day trip to Branson, MO!

Back at the hotel, Bob and I reserved our room for the VROC Reunion Rally 2016. We are not positive we will go next year, but we wanted to reserve a room just in case. We sat in the parking lot, talking with friends for a while before I returned to our hotel room to write in my journal and to begin packing for our trip back home.

We ate dinner at Grandma’s Beans and Cornbread with several friends  Bob had a chicken wrap with chips. I had a hot dog with coleslaw and chips. We shared a hot blackberry cobbler with ice cream.

Back at the hotel, the Kawasaki banners were being taken down and folded up for next year.

Kawasaki banners being taken down

The VROC Reunion Rally has come to an end.  We said our goodbyes this evening and finished packing. We hope to be on the road by 7:00 am tomorrow.