I was sick this past Thursday.  I had, I think, a 24-hour stomach bug. It was a sure sign that I still was not feeling 100% on Friday when I called off a planned overnight trip to Cuyahoga Valley National Park in Ohio. We would have left at noon on Friday.

On Saturday Bob and I awakened around 2:00 am, wide awake.  Within a short time we decided to make a day trip to Cuyahoga Valley National Park in Ohio. We were en route Cuyahoga Valley State Park at 3:20 am, after a fuel stop at Sheetz in Warren. Following GPS we drove through Titusville PA to I-80. Bob stopped for coffee at Sheetz in Titusville. He wanted to pick up coffee during the fuel stop in Warren, but his preferred flavor, Breakfast Blend, was still brewing.

We stopped around 5:30 am for breakfast at Denny’s in Hubbard, OH. After a filling breakfast, we were back on the road again by 6:10 am. By the way two scrambled eggs, two bacon slices and two pancakes were too much food for me. I ate the eggs and the bacon but only ate half of one pancake. Bob ate a big breakfast…a Philly Steak Omelette, hash browns and toast.

The waxing gibbous moon was visible most of the way to Ohio. The moon was bright and about 80% full. There was one place along the route that the moon was directly in front of us, as we crested a small incline. The view took my breath away!

We arrived at the great blue heron viewing area in Cuyahoga Valley National Park (on Bath Road) shortly before sunrise. It was much too cloudy for a proper sunrise. We saw lots of herons at the rookery. There wasn’t enough light for good pictures.  I took several photographs anyway.  I was not happy with those pictures, so I will not share them in this post.

From the great blue heron rookery we drove several miles north in the park to Brandywine Falls. The cloudy morning was beneficial for waterfall pictures.

Brandywine Falls is 65 feet high; it is one of Ohio’s highest waterfalls.

A boardwalk takes you to upper and lower observation platform.

Brandywine Falls, as seen from the lower observation platform

From Brandywine Falls we drove even farther north and out of the park. We drove to Chagrin Falls. From either side of the river there is a boardwalk that leads down to an observation platform from which to see the Chagrin Falls waterfall.

A boardwalk leads down to an observation platform.

Bob and I at Chagrin Falls waterfall 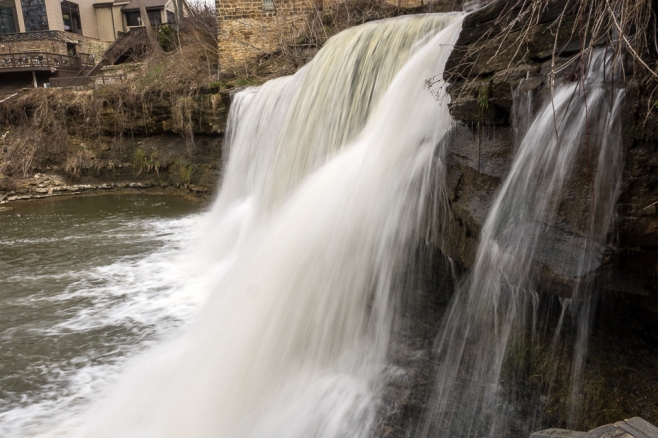 After photographing the waterfall, we climbed back up to Main Street. We went inside the Chagrin Falls Popcorn Shop, where Bob enjoyed a cup of Espresso and I enjoyed a cup of hot cocoa. I haven’t mentioned the weather yet, except to say it was a cloudy day. It was a chilly day, with temperatures hovering around the freezing mark. In addition to our drink purchases, we also bought two large popcorn bunnies, a purple one for Harper and a pink one for June.

We celebrated Easter with our granddaughters a week early.
Harper and June liked their popcorn bunnies!

From Chagrin Falls we returned to the great blue heron viewing area in Cuyahoga Valley National Park. The lighting was a little bit better compared to earlier in the morning. I took several pictures, of which I will share three.

There was constant movement at the Great Blue Heron rookery.
One or more herons would leave the nest in search of nesting material.

I watched this Great Blue Heron for several minutes.
He would pick up a branch, shake it a little and then drop it.
He repeated this task several times, until he found the perfect branch for the nest.

Great Blue Heron returning to rookery with nesting material
He would give the nesting material to his mate,
who would place it in the nest making adjustments as necessary.

It is my opinion that late afternoon and possibly early evening light would make for much better pictures at the rookery, after photographing there at sunrise and at late morning on this trip and in the early afternoon during a Spring 2013 trip.

From the rookery we drove the short distance to Beaver Marsh, where we took a short walk along a tow path. 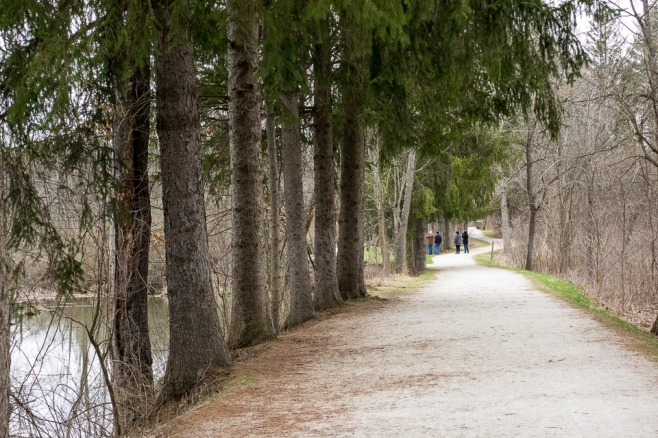 The park’s description for the Beaver Marsh says to “look for beavers, otters, muskrats, and waterfowl along the wetland boardwalk”. We didn’t see any beavers, otters or muskrats. We did, however, see a pair of Canadian Geese. 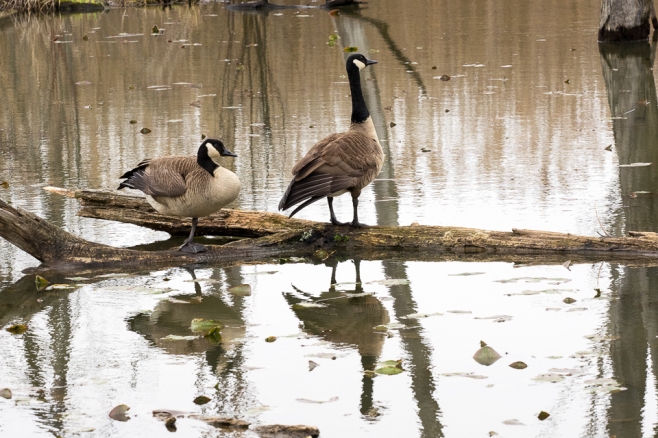 From Beaver Marsh we started the drive back home. At 1:15 pm we ate lunch at Thano’s Family Restaurant in Canfield, OH. We both ordered hamburger dinner entrees. Lunch was good but, again, I couldn’t finish my meal. Bob ate half of my Western Burger, and I left behind most of my French Fries.

Leaving Thano’s we drove by Lanternman’s Mill in Millcreek Park, but we didn’t stop. We followed U.S. 62 partway through Youngstown. Right before downtown the exit to U.S. 62 was closed for construction, and we got dumped into the downtown area. Thankfully it wasn’t busy downtown. We found our way onto I-80 and followed that route until Mercer, at which time we got back onto U.S. Route 62.

We returned home around 4:45 pm. It was a very long but great day. I am happy that I felt well enough to make the trip and am thankful that Bob wanted to go, too, and that he was willing to do all the driving.