Harper and June visited with me for several hours yesterday.  During the summer the girls are in daycare Monday through Friday, with the exception of Wednesday.  On some Wednesdays Harper and June will visit with me.

Chris, “Big Grandma”, dropped off the girls here around 10:30 am yesterday.  Harper and June were already playing with the new red ball with white stars that I had purchased at Walmart for them the day before, when I walked outside to greet them. After Chris left, the girls drew pictures on our driveway with sidewalk chalk, blew bubbles and rode their tricycles on the driveway. The girls didn’t have much time for these activities, as my friend Tina expected the three of us at her house at 11:00 am.  The girls were eager to go to the farm.

We didn’t stay too long at Tina’s house, just long enough to visit her bulls, cows, chickens, horses and cats. What animal did the girls like the most from their visit? Harper and June liked the cats the most. Several cats  live in the barn.

When we left the playground I took the girls to Wendy’s, where all three of us enjoyed a Frosty treat. It was hot outside; the Frosty treat was refreshing.

Inside we ate Dino chicken nuggets and applesauce for lunch. The girls watched TV, played two games of Candy Land (June and I played the first game; Harper and I played the second game); played games on their tablets, played with the Fisher Price house and Klip Klop stable and miscellaneous figurines. We did go outside once more, for a short time. The girls rode their tricycles, while I walked alongside, to the end of our street and back.

After the tricycle ride we came back inside. The girls took a bath and changed into clean clothes for church. 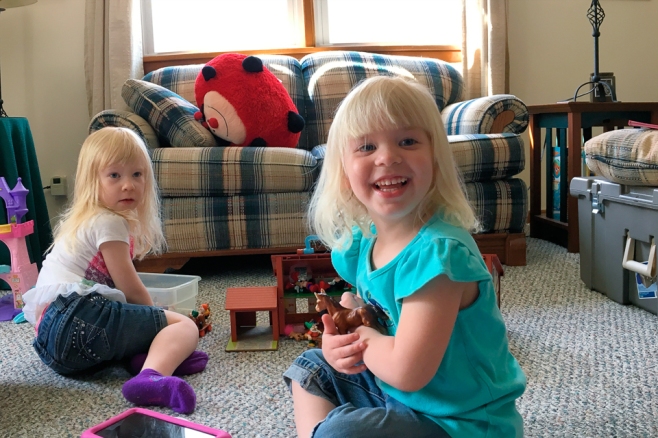 Harper and June, freshly bathed and dressed for church

Right before I took this picture the girls were looking away, playing with their toys.  Bob made a shrill whistle, which made the girls turn and look.

Sue, “Little Grandma”, picked up the girls at 4:15 pm. After church, the girls spent the night at Grandma Chris’s house.

One Response to “Granddaughters Visit”