We arrived at Worlds End State Park Visitor Center shortly after 10:00 am.  The state park was less than a 15-minute drive from Forksville–a brief stop on our way to the state park from The Nature End at Bald Eagle, where we had spent the previous two nights.  The area surrounding the visitor center was very inviting.  This area, located along Loyalsock Creek, is the main picnic area.  There were large picnic pavilions, tables available on a first-come, first-served basis; a food concession, playground; and a swimming area.  After obtaining a map and directions to two overlooks that we could see via car, we were on our way to the first overlook. The two overlooks that we saw were High Knob Overlook and Loyalsock Canyon Vista.

The view at High Knob Overlook was an incredible panoramic view up to 20 miles away.

Just imagine what this scene would look like in the Autumn, with the leaves in full color! 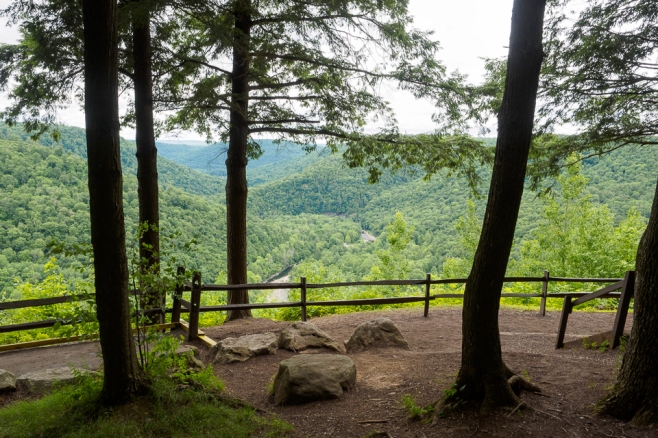 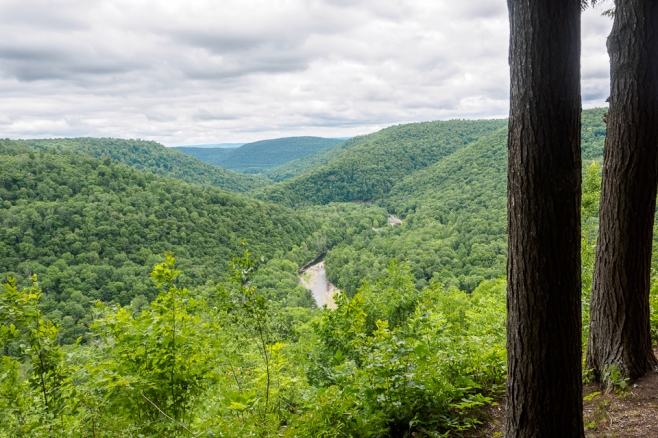 According to a sign, the elevation at Loyalsock Canyon Vista is 1,750 feet.

Again … just imagine what this scene would look like in the Autumn, with the leaves in full color!

Nearby we discovered a sign pointing to Rock Garden. We hiked the short distance to Rock Garden and found a collection of large boulders and rock formations with deep crevices. 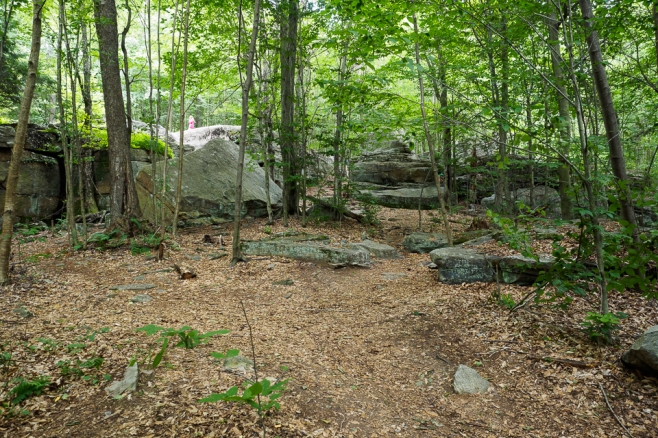 Rock Garden
One crevice provided a path deep into the rocks.

Rock Garden
See the crevice?
This was the rock crevice through which the man holding the child was walking.

“Eagles Mere…used to call itself “the town that time forgot”…so earnest and simple that it might have inspired Norman Rockwell.  In the 1800s wealthy folk from Philadephia’s Main Line visited the 2,00-foot-high mountain area, fell in love with the clean air and clear water, and set about causing development to happen.  They built Victorian “cottages,” similar to the gargantuan dwellings of the same name in Newport, Rhode Island.  In 1892, with ninety rental cottages, the town had a summer population of 2,500.  Since the roads were not paved, boardwalks covered the streets to protect the ladies’ white dresses from dirt.  In 1898 workers who helped move a building earned 15 cents per hour.  A week at the Eagles Mere Hotel cost $7.00; the Lakeside Hotel charged $2.50 a day.  A broom cost a dime; a bottle of ink, a nickel; and a gallon of gasoline, 20 cents.  Expect to pay somewhat more today.  While the geology is a nature photographer’s utopia, our human-made element also stands out.  It’s the Slide, a toboggan run built in 1904.  When the first intrepid rider, sitting on a big iron shovel, tested the grooved, planed, wooden course, he whizzed so fast that he burned the seat off his pans.  Today the slide is a 120-ton, 1,200-foot-long channel of ice, down which you can ride in relative safety–if you first pay a few bucks and sign a waiver–at 45 miles per hour.”

Does the book’s description makes you yearn to visit the small town of Eagles Mere, as it did me? 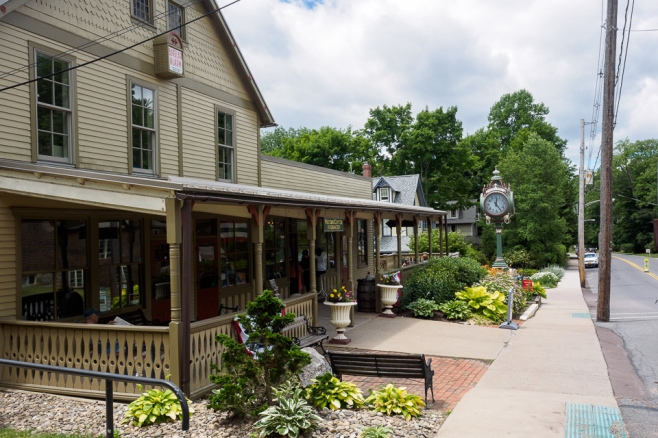 Eagles Mere
This building was the original general store.
It now operates as the Eagles Mere Museum’s gift shop.

We entered the Eagles Mere Museum via the front porch of the original general store.  The museum was very informative and quite nice.  As we walked through the museum, we learned about the formation of the Eagles Mere Lake and the history of glass making, farming, hotels, cottages, trains, the Toboggan Slide and lake steamers in Eagles Mere.  We spent quite a bit of time in the museum and didn’t even make it up to the second floor, where we were told there was a miniature village.  As we departed the museum, I picked up a few brochures.  I will be better prepared the next time we visit Eagles Mere, as one of the brochures is a walking/driving tour.  We would have used this brochure for an intensive tour of the town; however, at the time we were undecided if we would be returning home from Wellsboro (our next stop) or spending the night there.

Before we left Eagles Mere, we did take a walk down to the Eagles Mere Lake.

Eagles Mere Lake is private, for use of residents and summer dwellers.  The day we visited, there was a lot of activity at the lake.  People were arriving from all over town.  I asked one person if there was an event at the lake that day.  He said everyone would be taking their canoes out in the lake.  He said nothing more, just continued walking down the hill to the lake.

With the exception of the man who was walking down the hill to the lake, who seemed brusque to me, our visit to Eagles Mere was pleasant.  I liked it well enough that I would like to return and use the brochure that we picked up for a more intensive tour of the town.  I loved the museum and would very much like to visit it again as well.

We departed Eagles Mere at 1:40 pm and drove to Wellsboro, PA–the subject of a blog post yet to be written.

One Response to “The End of the World”