We began our day with a breakfast of hard-boiled eggs, cinnamon raisin bagels, an orange and coffee/tea…all of which we brought from home. We sat at a small table inside our hotel room and ate breakfast.  Shortly before 8:00 am we left on our tour of the White Mountains region.  Our tour of choice was the White Mountains Trail.

The White Mountains Trail begins and ends at the White Mountains Visitor Center in North Woodstock.  The trail is a 100 mile loop through sections of the 800,000-acre White Mountain National Forest and past many of the region’s most popular attractions.  We drove the entire trail, making many photo stops along the way.  We had a good day, although it was a rainy and gloomy day.

We began our tour of the White Mountains region from the Rodeway Inn, located along Route 3, 2.9 miles north of the White Mountains Visitor Center. Turning north onto Route 3 our first stop was 1.8 miles from our hotel.  Seen on the western (left) side of Route 3 is the Indian Head Profile on Mt. Pemigewasset.

Continuing our drive, we entered the Franconia Notch State Park,  We learned that a “notch” is the pass between two mountain ranges.  The lofty peaks of the Kinsman range on our left and the Franconia range on our right framed our passage through the park.

Our second stop was 2.4 miles farther north.  We passed up The Flume Gorge, as it had not yet opened for the day.  We planned to visit The Flume Gorge later during our vacation, but that visit never happened.  Heading north on Rotue 3, the road joined I-93/Franconia Notch Parkway.  Our second stop was at the Basin.  It was a short and easy hike from the parking lot to the Basin.  It had not yet begun to rain.  We spent about an hour exploring the Basin area. 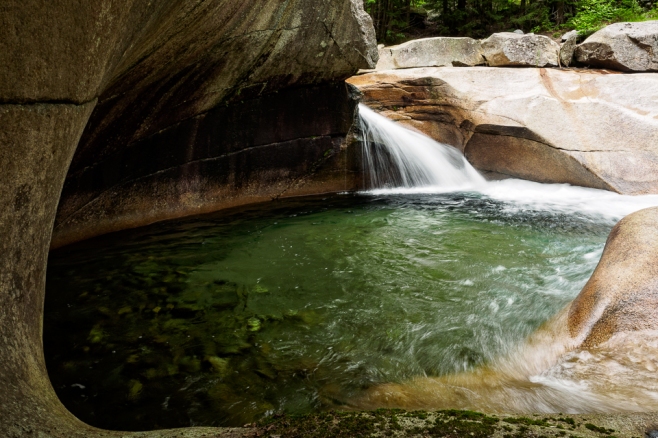 A sign at this site provided information about the Basin.

This large pothole in the Pemigewasset River, 30 feet in diameter and 15 feet deep, had its beginning some 25,000 years ago as the Ice Age came to a close. Water flowing from the melting glacier that filled Franconia Notch eroded the solid granite bedrock. During the thousands of years that followed sand and stones were whirled around by the force of the river causing a boring action that left the sidewalls smooth. The rock formation seen in the stream bed at the outlet has been known for generations as “The Old Man’s Foot”.

The great American naturalist, Henry David Thoreau (1817-62), on his first trip to the White Mountains in September of 1839 stood here, as you do, and watched the water cascade into the granite bowl and whirlpool around its walls. He would later write in his Journal, “this pothole is perhaps the most remarkable curiosity of its kind in New England.”

Samuel Eastman in his 1858 White Mountain Guide called this spot “One of the beautiful haunts of Nature, a luxurious and delicious bath fit for the ablutions of a goddess.”

From the Basin we drove another 2.4 miles and stopped at Boise Rock. 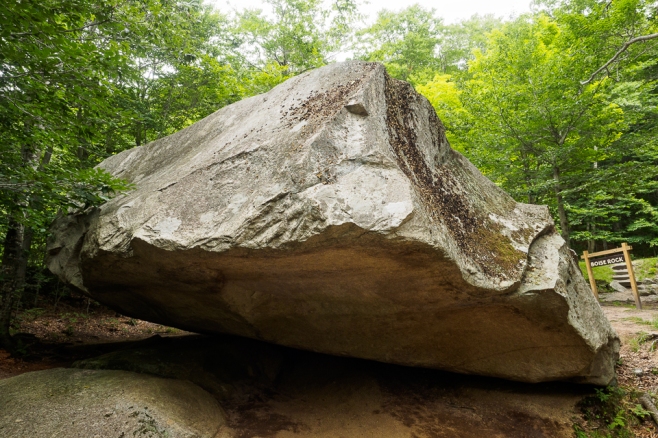 According to a sign at this site, Boise Rock has been a part of the history and folklore of Franconia Notch for generations.

Thomas Boise, a noted teamster of this region was sledding through the Notch in mid-winter, soon after the first road was built. Overtaken by a fierce snowstorm, he was unable to continue on. Realizing he must take drastic action to survive, he killed and skinned his horse. Crawling under the overhang of this rock, he wrapped himself in the hide and spent the night.  Men sent out the next day to search for him found Tom still alive but encased in the frozen hide that had to be cut away with axes in order to release him.

Cannon Cliff, on the left
This is the direction we drove, when we left Boise Rock.

A mile further we stopped at the former site of the Old Man of the Mountain natural stone profile. 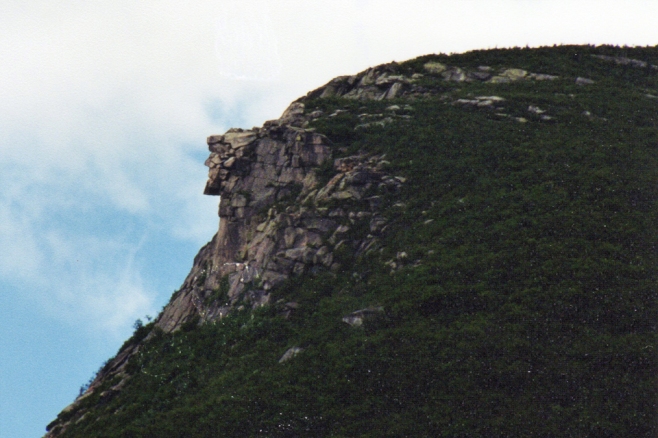 It was a short walk, along a paved path, from the parking lot to the Old Man of the Mountain Profiler Plaza. 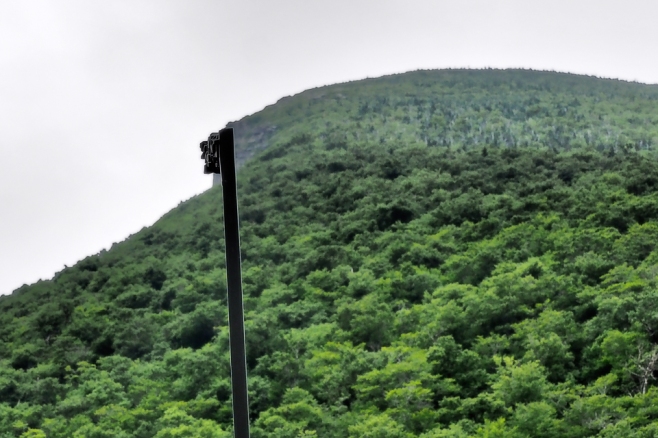 The Old Man of the Mountain is back!

We returned to the Old Man of the Mountain Profiler Plaza on another day of our vacation.  Other photographs will be shared in a future blog post.

It was raining, as we walked back to our car
from the Old Man of the Mountain Profiler Plaza.

Traveling north again on I-93, we took Exit 35 onto Route 3N.  We passed by the Mt. Cleveland Overlook, the Beaver Brook Rest Area and trails and through the village of Twin Mountain.  We turned right onto Route 302E.  Our next photo stop was 18.1 miles from Old Man of the Mountain Profiler Plaza.  We stopped an overlook of the Mount Washington Hotel.

It was raining hard, when I took this picture.  We returned to this overlook on another day of our vacation.  Other photographs of this grand hotel will be shared in a future blog post.

We continued on Route 302 through Crawford Notch and Crawford Notch State Park.  Our next two photo stops were within 4.2 miles of Mount Washington Hotel. 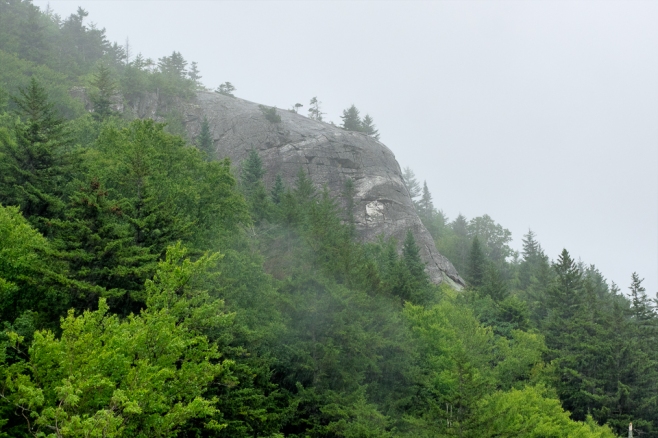 Silver Cascade Falls
This waterfall is located 0.7 miles from the Elephant Head.

If I recall correctly, it was drizzling rain when we stopped at the Elephant Head and Silver Cascade Falls.  There was a heavy mist all around us.

We continued on Route 302 past Bear Notch Road east to the Bartlett Covered Bridge, located 18 miles from our last stop.

Back on Route 302 we continued east to Glen, where it joined Route 16 south.  Our next stop, which was 5.4 miles from Bartlett, was at the Intervale Scenic Vista from which one can see Mt. Washington.

Intervale Scenic Vista
Somewhere out there is Mt. Washington.

We ate a picnic lunch at the Intervale Scenic Vista.  We sat in our car because it was raining.

After lunch, we continued on Route 16 through Conway.    We stopped at the L.L. Bean Outlet store, where I purchased a raincoat.  We avoided Conway for the rest of our vacation, as traffic was heavy and stop and go all the way through the town.

Our next photo stop was at the Saco Covered Bridge, located 7.2 miles from Intervale.  The bridge is visible from Route 16; however, you have to leave that roadway to see the bridge up close and personal. 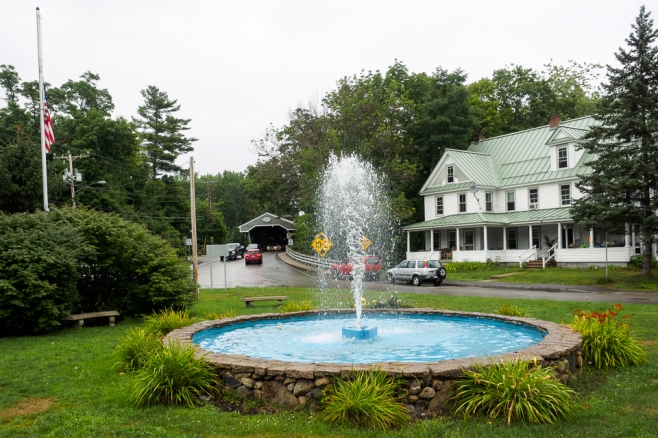 We reached the Kancamagus Highway at 3:12 pm. The highway is a 34.5 mile scenic drive between the towns of Conway in the east and North Woodstock in the west.  The Kancamagus Highway was named for an early Indian Chief of the Penacook Confederacy.  We made several stops along the highway, as we made our way east to west.

It does not cost anything to drive on the Kancamagus Highway.
However, if you stop at any of the recreational areas, a recreation pass is required.

Our first stop on the Kancamagus Highway was at the Albany Covered Bridge.

The Albany Covered Bridge is located 6.2 miles west along the Kancamagus Highway.

Look at the low-lying clouds.
It was drizzling rain, when we stopped here.

Did the rain / the weather stop people from spending the afternoon swimming?

When we left the Lower Falls Scenic Area we passed by several points of interest, as the weather, for the most part, was not conducive for taking quality pictures. We did, however, make three more photo stops along the Kancamagus Highway.. 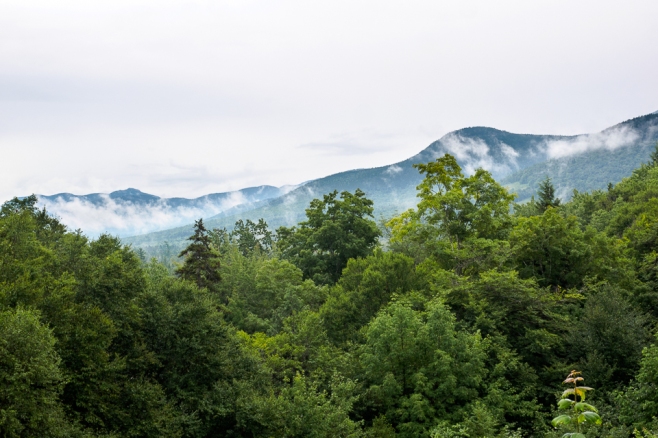 I wanted to stop at these two scenic overlooks because the low-lying clouds over the mountains were beautiful!

Our final stop on the Kancamagus Highway was 8.3 miles from the C.L. Graham Wangan Overlook.  We stopped at the Lincoln Woods trailhead, where we discovered a suspension bridge spanning the Pemigewasset River. 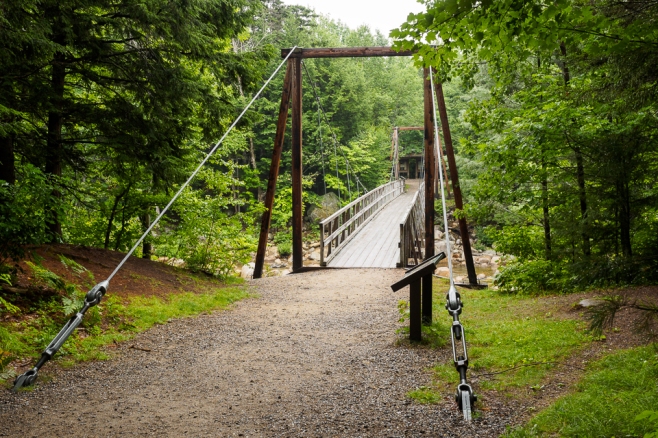 The Lincoln Woods Trail crosses the East Branch of the Pemigewasset River
via this 160-foot-long suspension bridge.

We walked across the suspension bridge.

Halfway across the bridge I took this photograph of the Pemigewasset River.
The bridge in the distance is the Kancamagus Highway.

It was less than a 6-mile drive to Truants Tavern in North Woodstock, where we ate dinner.  Bob ordered a Mushroom and Onion Burger with Onion Rings; I ordered a BBQ Bacon Burger with French fries.  Dinner was good.  We returned to our hotel, after dinner, and were in bed by 8:00 pm!

6 Responses to “The White Mountains Trail”