On Thursday, August 4, we awakened early, which enabled a departure an hour or two earlier than expected. We departed the Rodeway Inn (Lincoln, NH) at 6:00 am, leaving the room keys in our room because the hotel office was closed.

Our first photo stop was in Woodstock, Vermont, after driving for about 2-1/2 hours.

“Bob, stop!  There’s a covered bridge!”
Taftsville Covered Bridge, seen as we were driving through the village of Taftsville 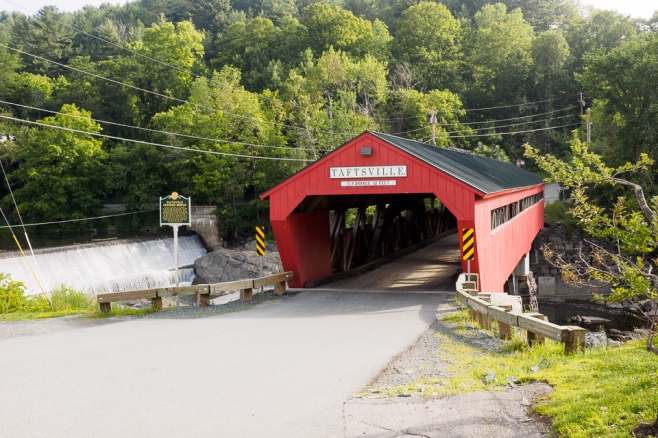 Taftsville Bridge is a two span 189 foot long Multiple Kingpost Truss with an arch. Spans are 89 and 100 feet. This bridge was built in 1836 and is one of the oldest covered bridges in Vermont.

It carries River Road the over Ottaquechee River in Taftsville Vermont.

About an hour later we stopped for breakfast at The Maple Diner in Bridgewater, Vermont.

Great breakfast!  We highly recommend this small family restaurant, if you find yourself in Bridgewater, VT some day.

We passed through Killington, VT where we couldn’t miss the ski slopes of Pico Mountain. We stopped for gas in Rutland, VT. What a busy and congested city that is!

We stopped briefly at Moreau Lake State Park near Wilton, NY. Using our NY Empire Passport we gained admission into the park. We followed Lake Road from the entrance gate to the beach. There was a nature center located near the beach.  The beach and picnic areas were in heavy use, and we were not able to find any nearby parking.  We skipped the nature center and made our way back to the park entrance.  We made a photo stop near the boat launch area.

We passed through LOTS of small towns on our way to Interstate 90! We avoided Albany, NY. We skirted around Saratoga Springs, NY. We finally reached Interstate 90 W at 2:33 pm, about 10 miles or so east of Utica, NY (near mile marker 222).

We checked into the Rodeway Inn in Weedsport, NY around 4:00 pm.  This hotel used to be a Best Western, as it is still identified in the GPS and on Facebook.

The only meal we ate out was breakfast. We didn’t stop for lunch and opted to eat a picnic lunch, with food items brought from home, for dinner.

On Friday, August 5, we ate breakfast at our hotel, packed the car and left a little after 8:00 am en route home.

We made a few stops along the way. 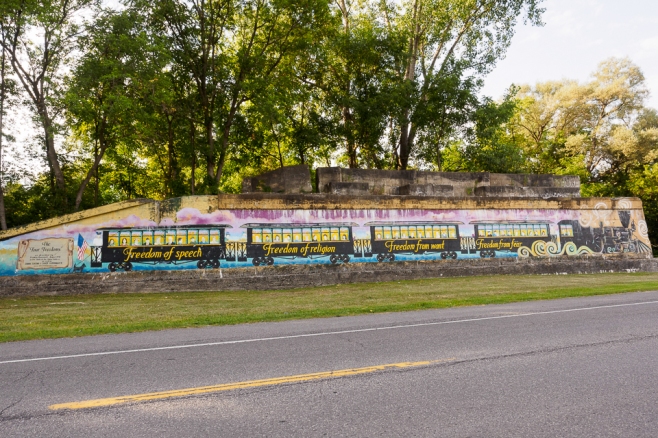 The four train cars on the mural are based on the four freedoms Franklin D. Roosevelt spoke of in his 1941 State of the Union Address.

Also in Weedsport are the remains of the Centreport Aqueduct, which is the centerpiece of a small park located along NY Route 31. 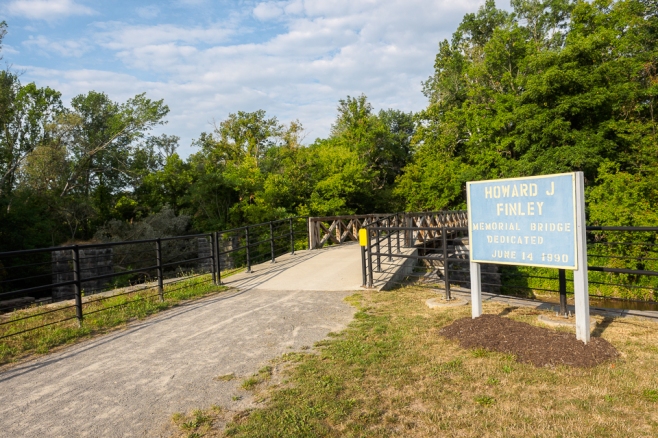 The towpath bridge was reconstructed to be nearly identical to the one built here in 1854. 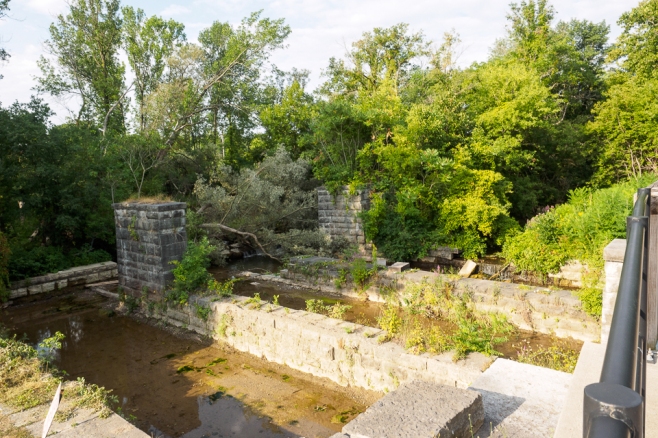 Remains of Centreport Aqueduct, as seen from towpath bridge

We stopped briefly in Port Bryon.  While Bob took our Nissan Xterra through a car wash, I photographed a colorful mural.

Montezuma National Wildlife Refuge
I cannot identify these flowers, but aren’t they pretty!

We drove through Ovid, NY and along Seneca Lake.  We drove through Watkins Glen. We had planned to hike the gorge but decided against doing so because of the heat and humidity but also dry conditions. When we passed by Hector Falls, just before reaching Watkins Glen, there was very little water falling. We had never seen Hector Falls so dry!

We stopped for a short time in downtown Corning.

The clock tower was built in memory of Erastus Corning in 1883.  The clock tower is located in the center of town, just north of Market Street in Center Square.

We thought we would eat lunch in Corning, but opted instead to eat lunch a little closer to home.  All we did in Corning was photograph the clock tower, before continuing on our way home.

We stopped for lunch at Sprague’s Maple Farms in Portville, NY. I ordered a center cut pork chop dinner with baked potato, apple sauce, carrots and tossed salad. My dinner included two pork chops. I boxed one and brought it home. Bob ordered a Sugar Bush Club (a Triple-decker sandwich filled filled with turkey, country ham, bacon, lettuce, tomato and mayonaisse) with maple baked beans. We picked up a piece of peanut butter fudge for later, as we paid the bill on our way out. Lunch was excellent.

We returned home at 4:00 pm. We unpacked the car, putting away what we had taken with us. I uploaded to my computer the pictures that I had taken, while on vacation. I entered in Quicken our expenditures during vacation. Bob mowed the grass.  With the exception of doing laundry the next day, I took it easy. Bob took it easy as well. Being on vacation seems to be more tiring than being at home, as we are always on the go.  I have heard people say “I need a vacation after vacation”.  I agree!

This blog post concludes the account of our 7-day New Hampshire vacation.  I hope that you enjoyed your armchair travel!