On April 23rd I received an email announcing that Flickr has agreed to be acquired by SmugMug.  I was informed that nothing would change immediately with regard to my Flickr account.

On September 19th I received an email notice that my 1 Year Flickr Pro subscription would renew on October 19th at the current price of $49.99 billed annually.  I had been a Flickr Pro subscriber since October 2008 and had paid $24.95 annually for the subscription.  The last time Flickr changed Pro pricing was when it re-introduced Flickr Pro at $49.99 in July 2015. At that time Flickr rewarded Pro members with a promise of a two-year protected price. The current subscription price of $49.99 is not an increase in price. Flickr is merely bringing grandfathered Flickr Pro members to the current Pro rate. It was nice, as a Flickr Pro customer for a number of years, to be grandfathered in 2015 for 2 years at the price I had been paying ($24.95).

As of September 19th a Flicker Pro account provided unlimited, full-resolution uploads; ad-free browsing for both myself and my visitors; advanced stats; industry discounts including 15% off Adobe Creative Cloud; the Flickr Auto-Uploader that allows me to automatically back up my photographs both on my computer and on my Apple devices.

Not having a Flickr Pro subscription was short lived. On or about November 1st Flickr announced a change that would directly impact me.  Beginning January 8, 2019, free accounts will be limited to 1,000 photos and videos. Flickr Pro will continue to provide unlimited storage. I have several thousands more pictures and videos than the 1000 picture limit of a Flickr Free account. Additionally the photographs contained in this blog are linked to Flickr. It would be an impossible task for me to remove thousands of pictures from Flickr and maintain my blog and Flickr connection.

I renewed my Flickr Pro subscription on November 1st.  I am certain there will come a time when my blog will no longer exist.  I can’t see myself (or my heirs) paying indefinitely for Flickr Pro and my WordPress blog.  Until that time arrives, though, it is business as usual! 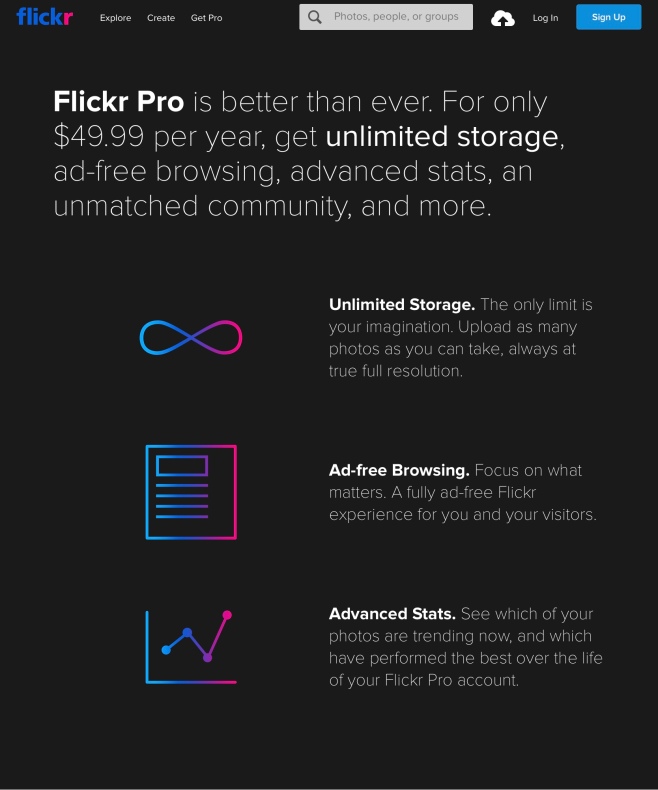