We spent several hours with our granddaughters Harper and June on Friday, November 23.

We picked up the girls at their house around 10:30 am.

We drove to Friendly’s Restaurant in Jamestown NY, where we had an enjoyable lunch. 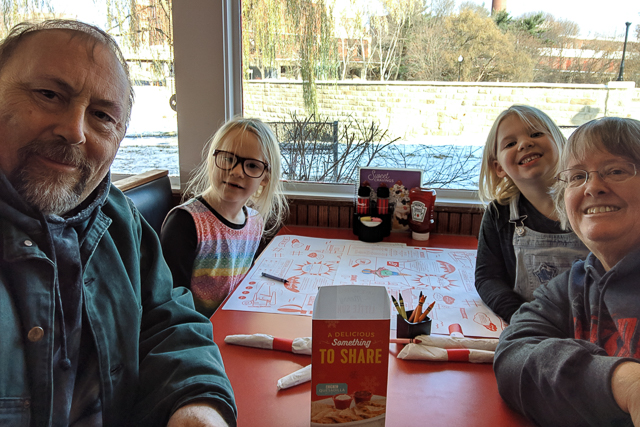 Our granddaughters, Bob and I at Friendly’s Restaurant

The girls ordered their usual meal–hot dogs and macaroni and cheese with an ice cream sundae.  Both girls chose Rudy the Reindeer sundaes. 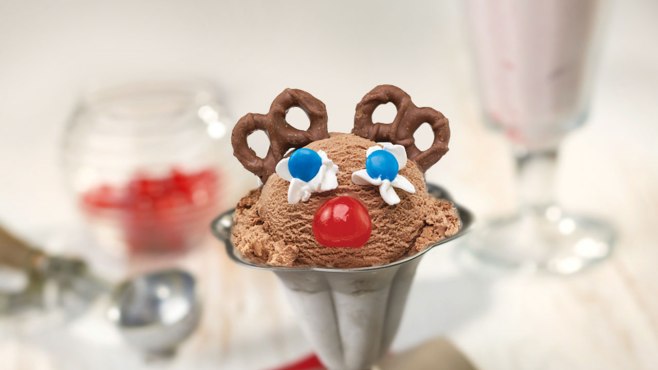 Bob had a fish dinner; I had a BBQ chicken sandwich with fries.  Both of our meals included a small sundae.  Harper didn’t eat her macaroni and cheese, but she ate most of my fries.  Juniper didn’t eat any of her hot dogs.  I asked for a box, and we took home the macaroni and cheese and hot dogs for the girls to share later.  By the way, when we returned home and I had a good look at our restaurant bill, I noticed that Bob and my entrees were reduced by 50%.  Happy Black Friday to us!

After lunch we drove to our house, where the girls played for several hours with toys and on their tablets.  We also watched TV.   I had to chuckle, when June asked me what was in the gray plastic tote.  The tote is the girls’ toy box.  For a while now I have brought out only a few select items for the girls to play with, when they visit.  On this visit, though, I brought out all their toys.  June asked if she could open the tote, when I told her their toys were inside.  I said sure.  When she opened the tote and saw the toys, June’s eyes got big and she said “Wow!”.  There was not one new toy in that tote!

The girls talked with Judy (my brother’s wife), too, via Facebook video chat.  That was a fun call for the girls, as they put on silly faces and hats and played some quick games with Aunt Judy.

When I finished putting away the girls’ toys, after their Friday visit, I was missing one toy–the baby doll that Harper had been playing with.  I found Harper’s baby on Wednesday morning.

I found Harper’s baby in one of my kitchen drawers.