We set the GPS to avoid highways for our drive from Amsterdam NY to Peru VT.

Our first stop was for lunch at Sunset Grill in Ballston Spa, NY. Bob ordered a Cobb Salad; I ordered a grilled chicken sandwich.  Our lunches were good.  What caught my attention, though, were the salt and pepper shakers at the tables near us. 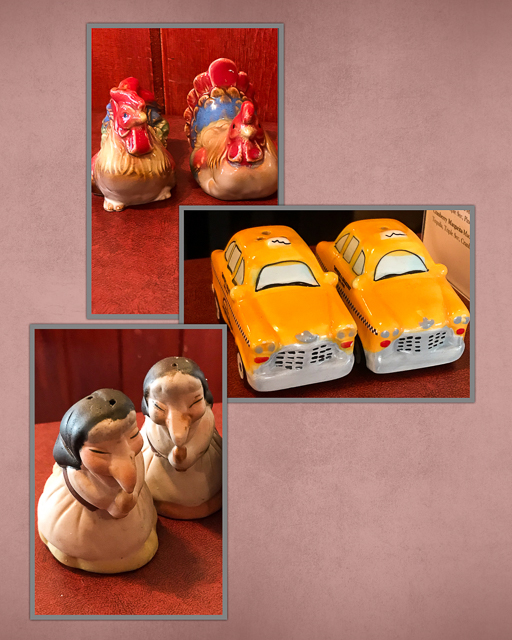 Our waitress said that the salt and pepper shakers were brought to them as gifts when patrons returned from travels all over the world.

In May this year Ballston Spa held its second annual birdhouse competition. 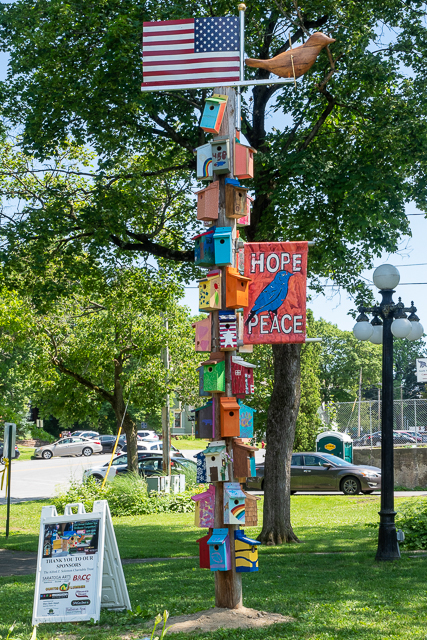 I like how the birdhouses are displayed in the park.

The Soldiers Monument is located at Front and Low Streets.  The monument lists the names of local soldiers from the towns of Milton, Ballston, and Malta who served in the American Revolution, the War of 1812, the Mexican War and the Civil War. 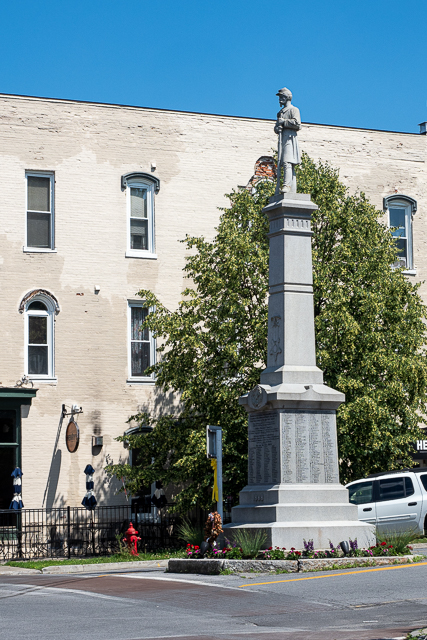 As an aside, I learned recently that my maternal second cousin, Dr. Naton D. Leslie, Jr., lived in Ballston Spa.  Naton died in December 2013.  I never met him.

Our second stop was at Buskirks Covered Bridge.

Buskirks Covered Bridge is 165 feet long and crosses over the Hoosick River.

Buskirks Bridge is in the town of Hoosick but takes its name from the hamlet in which it is located.

Our third stop was at Eagleville Covered Bridge. 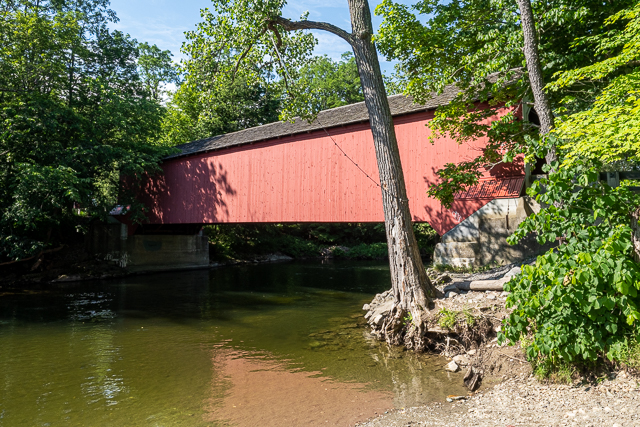 Eagleville Covered Bridge is 100 feet long and crosses over the Battenkill River.

Eagleville Bridge is in the town of Jackson-Salem, NY but takes its name from the hamlet in which it is located.

Our fourth stop was at Arlington Covered Bridge. 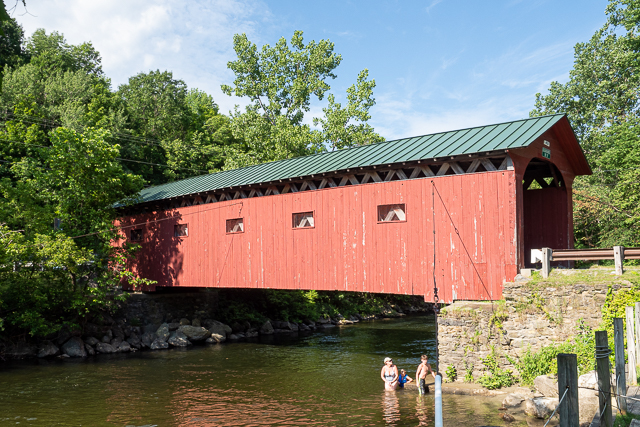 Arlington Covered Bridge is 80 feet long and crosses over the Battenkill River.

Arlington Bridge is in the town of Arlington, VT.  According to the people at this bridge, the river here was a fine place to swim.  On the other side of the bridge we saw lots more people in the water, swimming and using inner tubes.

The Norman Rockwell House is very near Arlington Covered Bridge.  We drove in front of the house.  I wasn’t impressed, so I didn’t take any photographs.

We arrived at our night’s accommodation, the Lodge at Bromley (Peru, VT), at 6:00 pm — 12 1/2 hours after leaving home.  After checking in and carrying in our bags, we went in search of dinner.  But, first, I took a couple pictures of the view from our balcony.

We could see Mountain Adventure Park from our balcony.

We had a corner room, so we could see the mountains across the road from our balcony too.

There are a few restaurants nearby.  The first place we went to — J.J. Hapgood — was very crowded.  We opted to turn around and go to Bromley Market Country Store that we had passed on our way to J.J. Hapgood.  The country store was closing, as we arrived.  We ended up eating at Raven’s Den, located in Manchester Center, VT.  It was an excellent restaurant choice.  We ordered a 12-oz prime rib dinner with split plate.  For an additional $19.00 we shared the prime rib and had full portions of the unlimited salad bar and three vegetable side dishes (carrots, green beans and corn on the cob).  Our meals were delicious; the service was excellent; and the split plate option was a good deal.