We ate breakfast at McDonald’s once again, after a break for a couple of days.  My meal of choice this past week has been a bacon, egg and cheese bagel, hash browns and orange juice.  Bob ordered two sausage burritos, hash browns and coffee.

This morning we visited the Maine State Aquarium, located in West Boothbay Harbor.  After paying the $7.00 each admission fee, we walked past the gift shop into the aquarium.  The first thing we noticed were two large touch tanks.  At center stage was a tank that held sharks and skates.  We petted a shark!  Its skin felt like sandpaper.  Inside the second touch tank, the Tidepool Touch Tank, were lobsters, horseshoe crabs, hermit crabs, sea cucumbers and other invertebrates.  You could touch AND pick up any of the invertebrates in this tank.  Recessed tanks along the walls held a variety of species native to the Gulf of Maine.

We attended a talk on lobsters.  The Aquarium features lobsters in all sizes and colors.

This lobster was in the Tidepool Touch Tank.

We learned why a lobster is banded. The bands prevent lobsters from eating each other!

We learned that fishermen bring the aquarium odd-looking lobsters, e.g. lobsters with multiple claws or lobsters with no claws and a variety of colored lobsters.

Our granddaughters would have enjoyed spending time at the Maine State Aquarium.  Not only would they have enjoyed the touch tanks, but they would have enjoyed the opportunity to do some sport fishing from the aquarium dock.  Rods and reels are available free-of-charge, and staff provides necessary instruction.  We watched some children fishing for a few minutes.  We didn’t see anyone catch a fish.  There were a couple lobster traps hanging from the dock, which were available to be pulled up.  One trap contained a lobster, which was dropped back into the water.  The trap that we pulled up had a crab in it.  We just dropped the crab and trap back into the water.

Leaving the aquarium, we returned to Pioneer Motel at 12:30 pm.

Around 4:30 pm we drove into Boothbay Harbor, where we enjoyed the refreshing breeze and bought pizza (2 slices each) at Pier 1 Pizza.

Our Lady Queen of Peace Church

Boothbay Harbor Waterfront (near where we bought pizza) 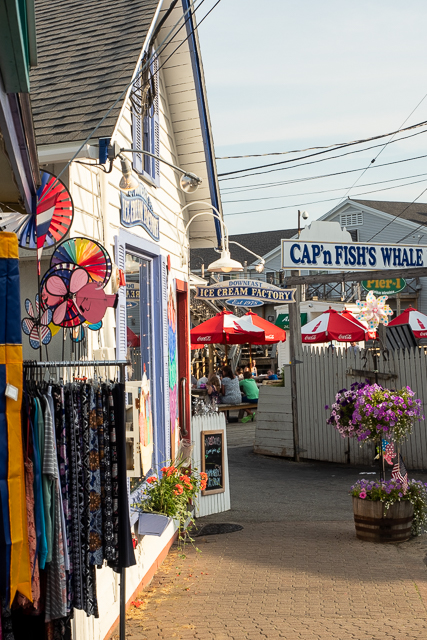 Boothbay Harbor Waterfront (near where we bought pizza).

Leaving Boothbay Harbor we drove to Southport Island to Newagen, where we saw The Cuckolds Lighthouse once again. 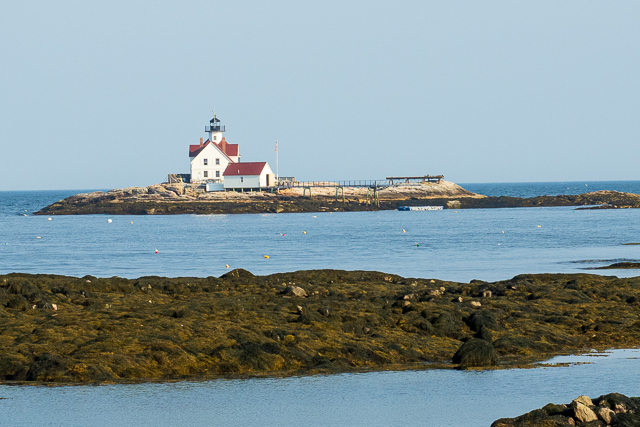 Bob and I on dock with The Cuckolds Lighthouse behind us

We took Route 27 north to River Road through Damariscotta to the Mobil Fuel Station, where we filled up.  We will start home in the morning with a full tank.  We returned to Pioneer Motel around 7:30 pm.

7 Responses to “Maine Vacation: Winding Down”