We got up at 4:45 am this morning, which isn’t surprising as we were in bed by 9:30 pm last night.  I had hoped to see the sunrise.  We had a good vantage point from which to see the sunrise, but it was raining.  We did enjoy sitting outside on our covered balcony, though, while it rained.

The Lodge at Bromley provided a complimentary hot breakfast beginning at 7:00 am.  We were disappointed with breakfast.  We expected scrambled eggs, hot potatoes, a breakfast meat, waffles and a variety of pastries (donuts, muffins, etc.).  I guess Best Western and other chain hotels have spoiled us.  The Lodge at Bromley provided hard boiled eggs, miniature waffles because the amount of batter was insufficient, plain bagels, breads, yogurt, cereal, juices and hot beverages. You would think that the hot water would be hot at 7:00 am.  It was lukewarm.  I had to request hot water, which the staff quickly took care of.  With the exception of breakfast, our stay at The Lodge at Bromley was good.

We checked out of the hotel and was on our way to Edgecomb ME at 7:40 am.  As we did the prior day, we instructed the GPS to avoid highways.

Our first stop was in Springfield VT, where we went for a short walk.  The highlight of our walk was seeing a waterfall. 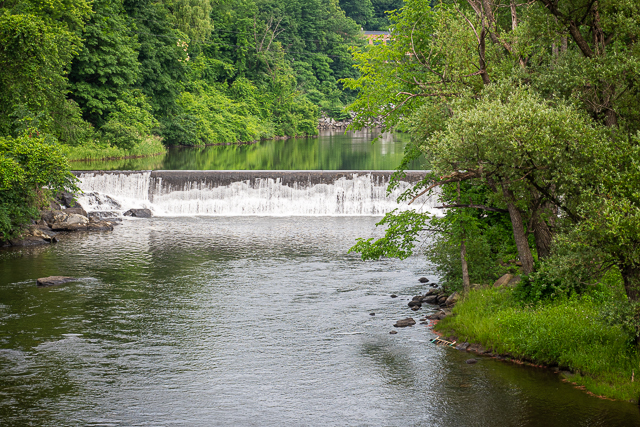 Before reaching Springfield I read that the town had a waterfall and that it had been selected to host the premiere of The Simpsons Movie, which, like the Simpsons TV show, is set in a town called Springfield.  I saw a photograph of the Springfield Movie Theater taken on July 21, 2007. The photo showed the marquee displaying the premiere for The Simpsons Movie as well as a giant pink donut.  During our walk I looked for a place resembling the photograph.  I found the movie theater but no marquee.  As we were walking back to our car, I stopped a policeman who was walking towards us.  I asked the policeman about the marquee.  I learned that the marquee and any other memorabilia from the premiere of The Simpsons Movie was on display in the Chamber of Commerce, which was closed when we passed by it. 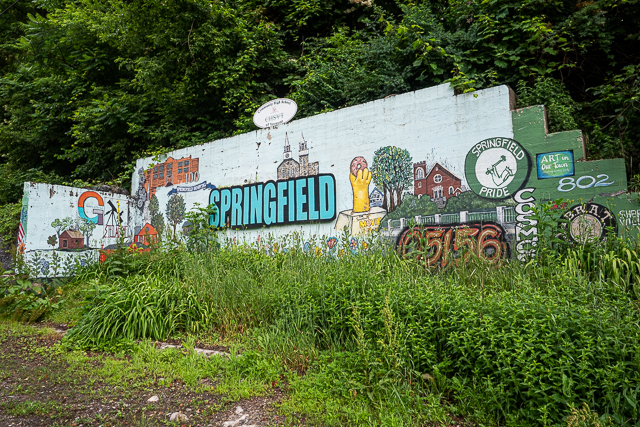 Our second stop was at the Goode Shoppe Lollipop in New Hampton NH, where I purchased a lawn ornament. 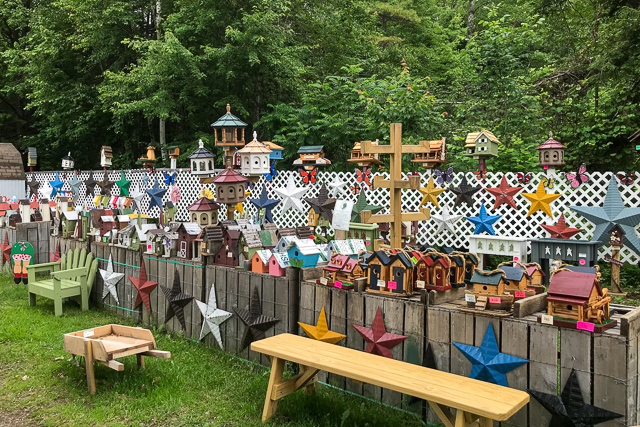 Oh my!  So much to choose from! 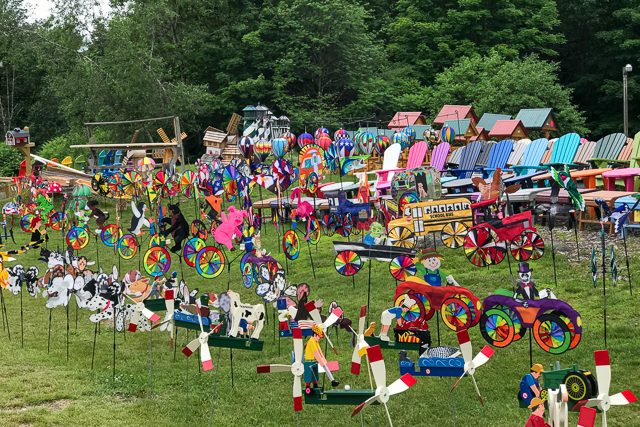 The lawn ornament, though, that prompted a stop here was a lawn ornament that I had spotted in someone’s yard a ways back — a yellow cat on a bicycle spinner. 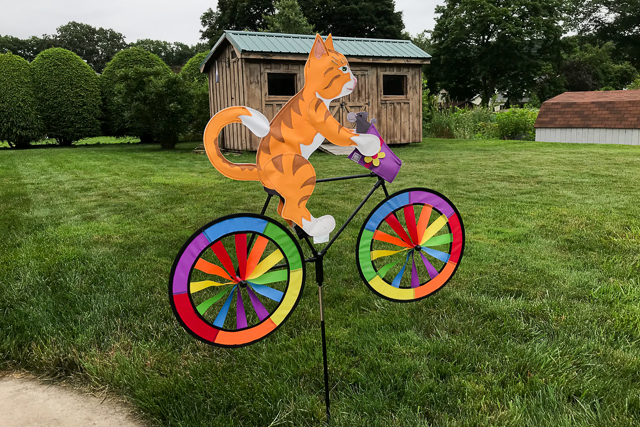 Our third stop was for lunch at Subway in Moultonboro NH.  We saw a baby bear run across the road, in front of us, less than a mile from Subway!

Our fourth stop was in Standish ME, at the Sebago Lake Overlook. 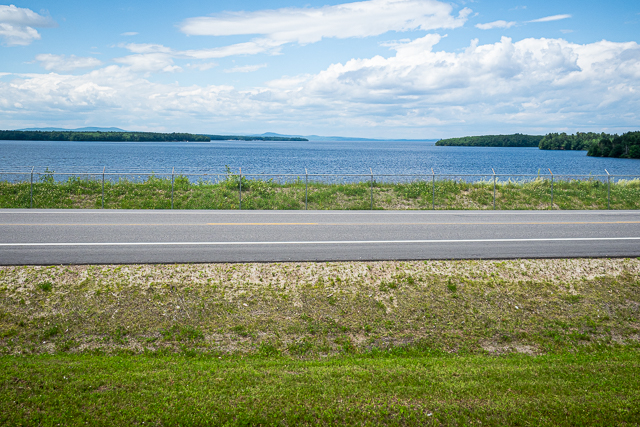 This is a fairly new overlook. In January 2018 the Standish Town Council voted unanimously to approve a lease agreement with the Portland Water District to allow the overlook to be built on district property and maintained by the town.

The mountains seen beyond the lake are New Hampshire’s White Mountains.

We checked into Pioneer Motel in Edgecomb, ME at 3:30 pm.  We will spend the next 7 nights here, while we explore MidCoast Maine.  Pioneer Motel is a work in progress.  There are three single story buildings of rooms, two buildings in the front and one building in the back.  The two buildings in front have been turned into rental apartments.  The building in the back is the motel.  The owner is actively cleaning up the grounds and renovating motel rooms. 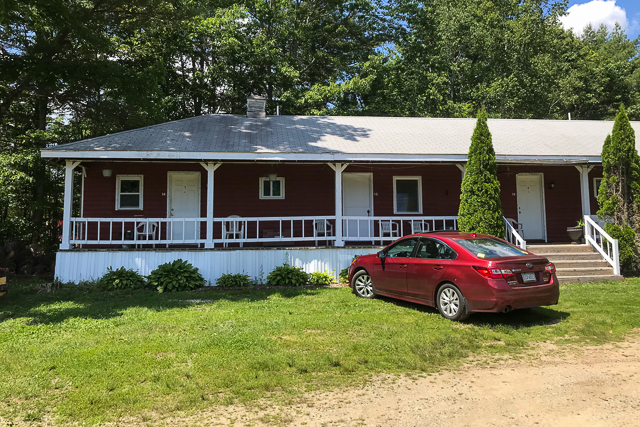 Pioneer Motel
Our room is the first one on the left. 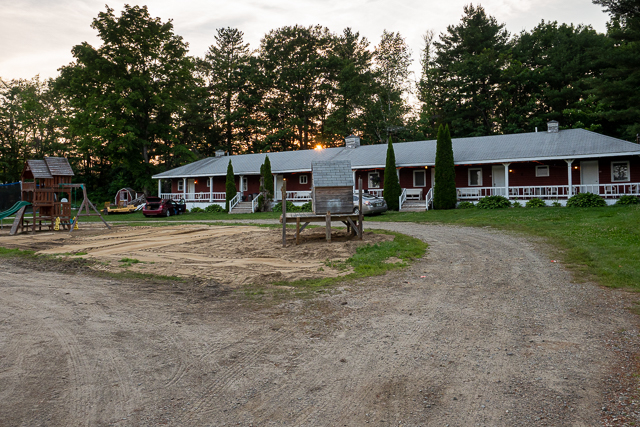 Pioneer Motel (expanded view)
Our room is the first room on the left.

Three rooms were renovated this Spring.  Our room has a new door, new windows, a patio door, new flooring, new furnishings and is newly painted throughout.  It was tastefully decorated with a white, gray and black theme. 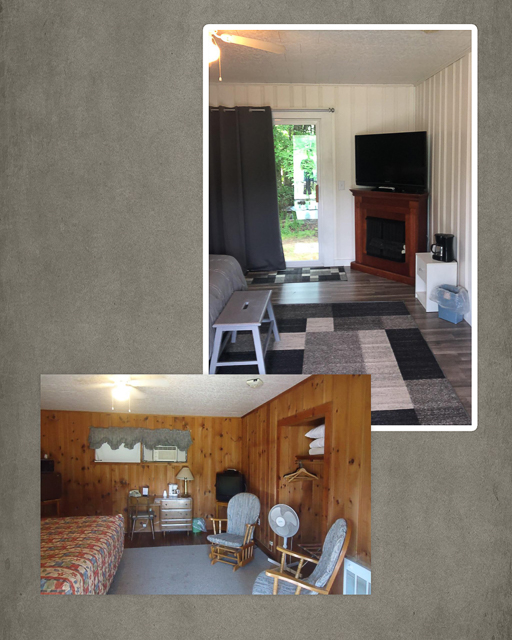 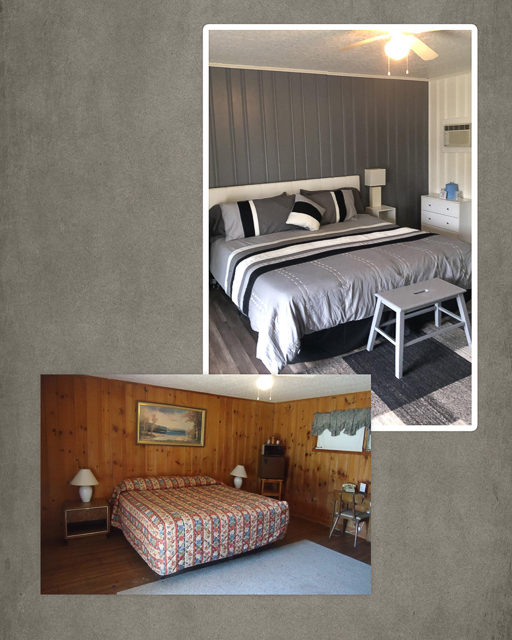 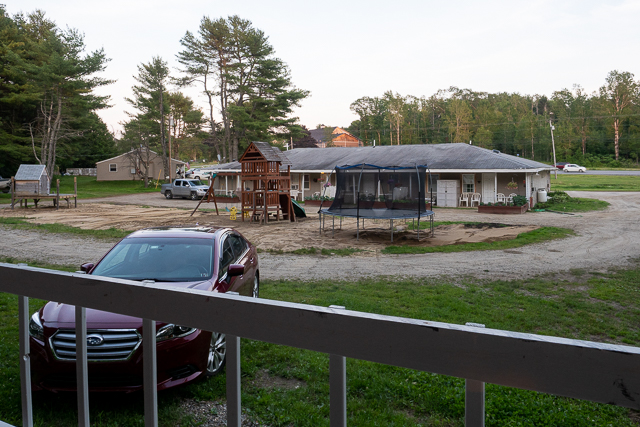 This is the view from our room. The two buildings are rental apartments. 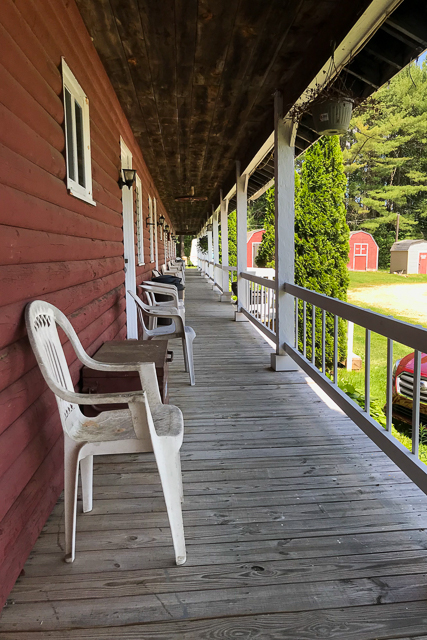 I took that previous photograph from the porch. The porch is really LONG!

The owner said that he plans to create a screened-in porch for each of the room, with individual stairs leading to each room. 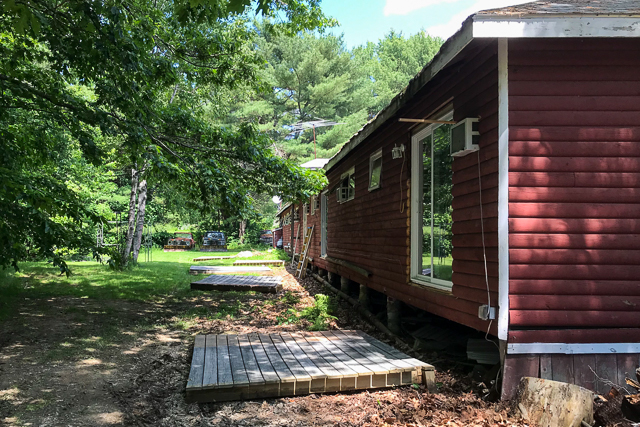 The owner is in the process of installing decks on the back of each motel room.

The owner said that he plans to place a bistro set (table and two chairs) on each deck.

We left in search of dinner around 5:00 PM.  We drove the short distance to the town of Damariscotta.  We ate dinner at Schooner Landing Restaurant. 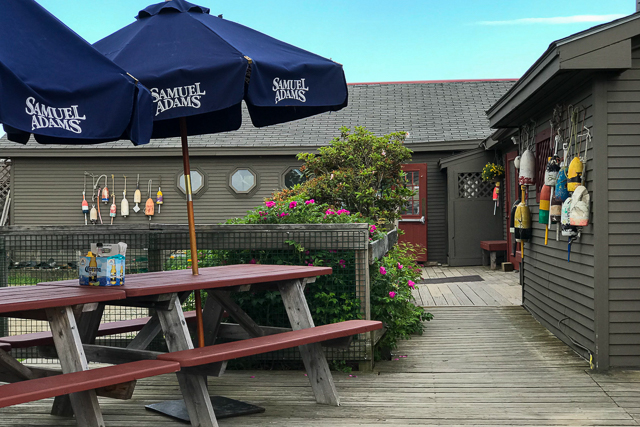 We sat outside, on the dock.  Our view was the Damariscotta River.  I had a classic fish fry; Bob had Cajun blackened fish.  Schooner Landing Restaurant was a good choice for dinner.

We returned to Pioneer Motel at 6:00 pm, where we stayed for rest of the evening.

We returned home from New Hampshire late Saturday afternoon. We departed our hotel at 6:30AM. Other than strong winds, our ride home was uneventful. We did see up to 6 inches of snow while at the higher elevations of Route 9 in Vermont. None of the snow was in the roadway. Here are a few photographs of scenery on our way back home.

We had been driving for just a little over an hour when we caught our first glimpse of snow. 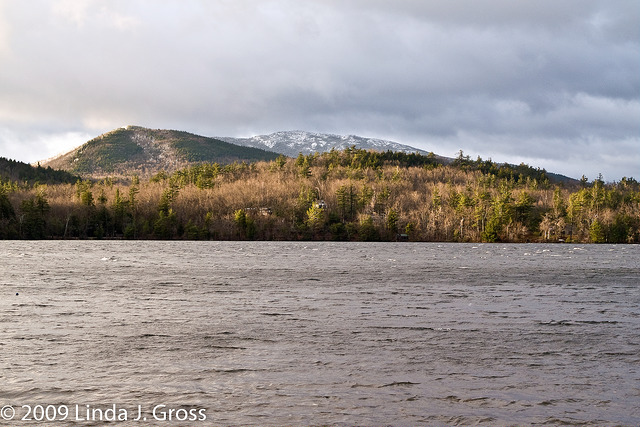 There is a scenic overlook located on Rt. 9 in Vermont between West Brattleboro and Wilmington that offers a 100-mile view of the surrounding countryside. 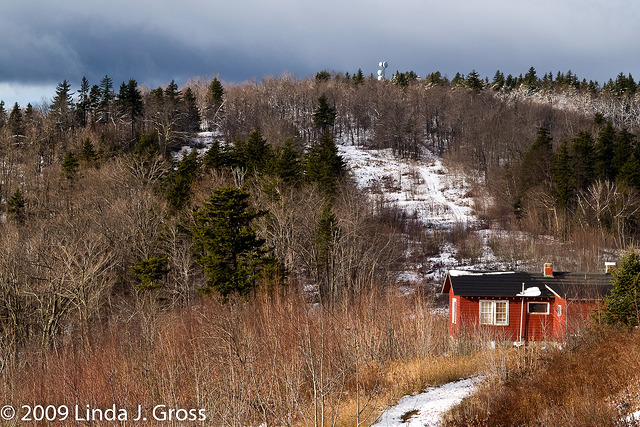 We were at snow level while at the Hogback Mountain Scenic Overlook.
(Wilmington, VT) 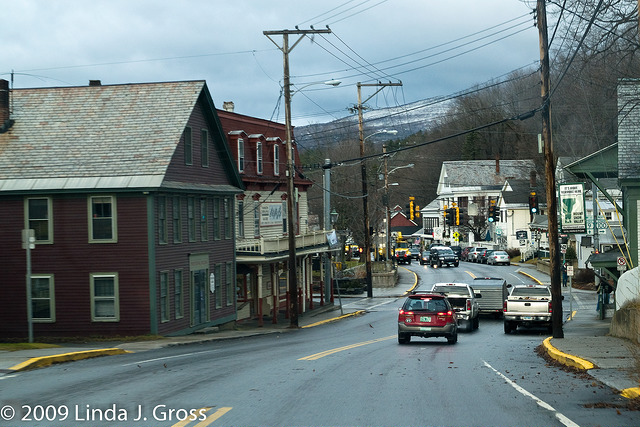 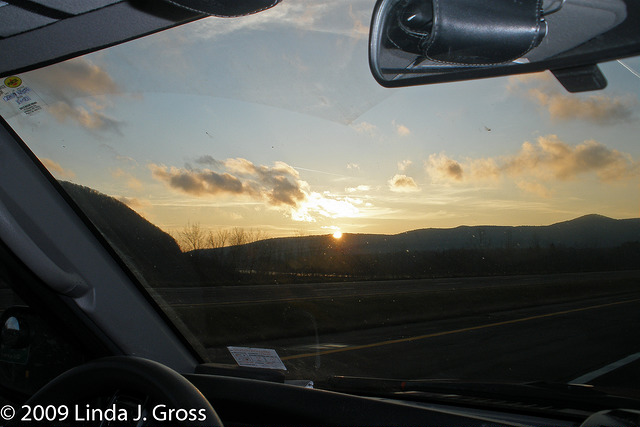 We were about an hour’s drive from home when we were blessed with a beautiful sunset.

We continued our drive to New Hampshire on Thanksgiving Day. We checked out of our hotel, filled up with gas and were on the road by 6:30AM. Except for the first couple hours when we drove through fog, we had good driving conditions. We made a couple photo stops along the way. Our first stop was in Bennington, Vermont, where we saw the Bennington Battle Monument. This 306-foot stone monument is dedicated to the Battle of Bennington that took place during the Revolutionary War in 1777. Visitors may ride an elevator to the top of the Bennington Monument for panoramic views of the valleys and rolling hills of Vermont, Massachusetts and New York. Unfortunately, we were not able to do this as the monument was closed for the season. 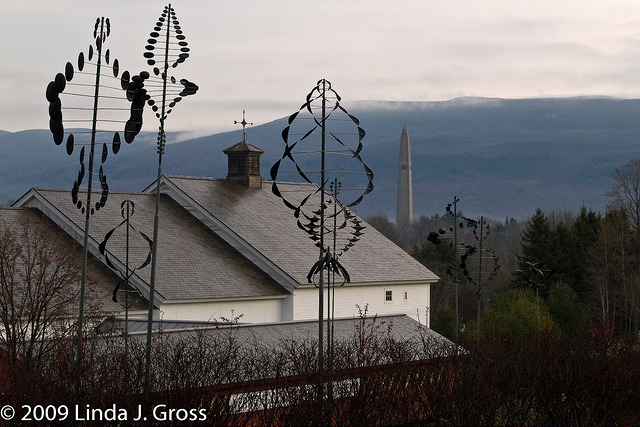 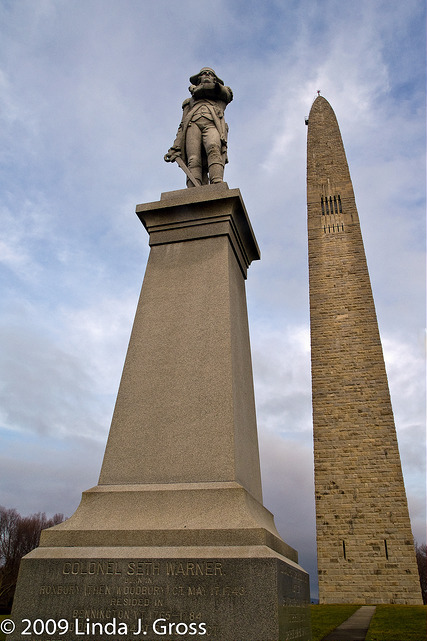 We stopped briefly in Wilmington, Vermont, where I took a picture of one of the village’s most prominent landmarks — the Molly Stark statue. Molly Stark was the wife of American Revolutionary general John Stark, who was involved in the Battle of Bennington. 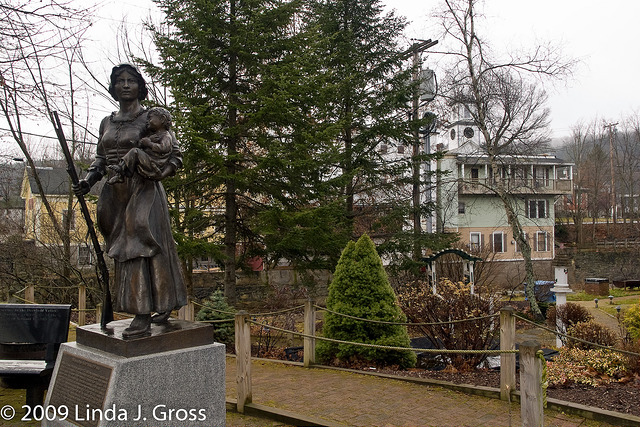