I made homemade blueberry muffins this morning.

The recipe calls for 1/3 cup sugar.  I substituted the artificial sweetener, Splenda, for the sugar.  I used frozen blueberries, the blueberries being those which I picked this summer with my friend Bonnie. The muffins taste as good as they look.

I can’t recall preparing homemade muffins since that one day in July. Since then, I have purchased store baked muffins or used a ready-to-bake muffin mix.  I have about 2 quarts of blueberries in the freezer.  I will prepare more blueberry muffins in the near future.

Our friendship started in September 2010, with a few comments on the photograph of a sparrow. 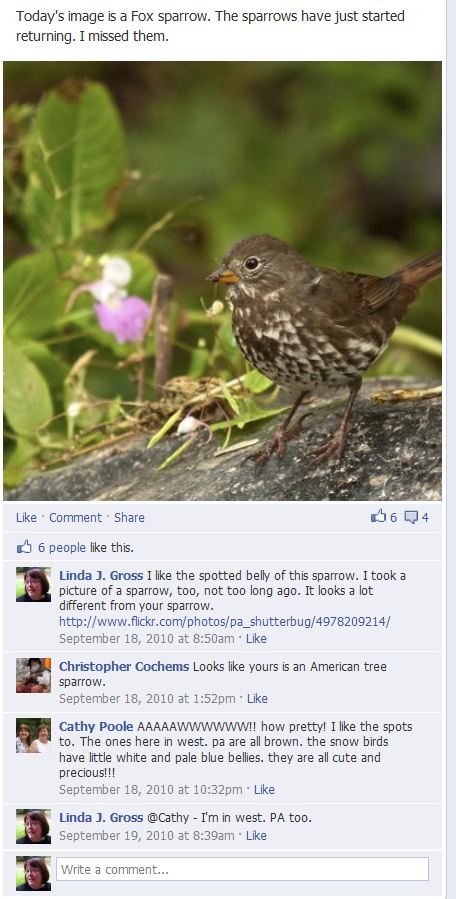 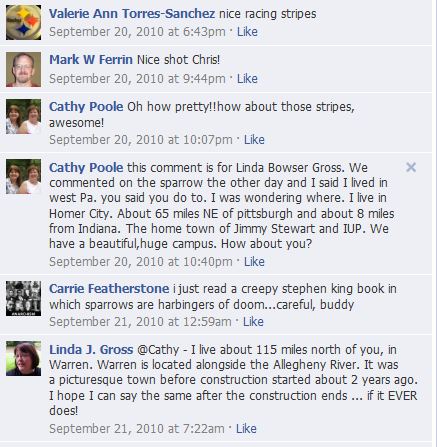 The photograph of the sparrow is the work of Christopher Cochems, who I met via an online photography forum.   Christopher lives in California.  We have not yet met each other in person.  I hope one day that Bob and I can meet him.  Christopher inspires me each day in my own photography with his beautiful photographs.

The Internet makes the world such a small place, doesn’t it?  Two women who live in Pennsylvania, a little more than 100 miles apart, run into each other while commenting on a photograph of a sparrow posted by a man who lives in California.

Cathy and I became Facebook friends on September 30, 2010.  A little more than 2 years later we met in person.

Yesterday morning Bob and I met Cathy and her boyfriend “Ducky” at The Westline Inn, located in the heart of the Allegheny National Forest.  We traveled together from there to Kinzua Bridge State Park, where we walked out on the Kinzua Bridge Skywalk.

What a cold and windy day it was!  The temperature was around 34 degrees at the time we visited Kinzua Bridge State Park.  We saw our first snowfall of the 2012-2013 season.

A young man asked if we wanted a group photograph.  We agreed quickly.

Bob, Cathy, “Ducky” and I at Kinzua Bridge Skywalk

We returned to Westline Inn and enjoyed a lunch of grilled chicken salad (Bob and I) and crab cakes (Cathy and “Ducky”).  Service was a little slow but well worth the wait.  Our lunches were very good.  The relaxed atmosphere allowed the four of us to get to know each other better too.  It was wonderful to meet Cathy, after being Facebook friends for so long.  We talked about getting together again.  I believe getting together again is a strong possibility.

Bob and I spent Saturday, June 16,  in Erie at Waldameer  where we attended his company’s annual picnic.

We rode the motorcycle, my first long ride since knee surgery.  Actually, it has been a lot longer than that since I have ridden the motorcycle.  I didn’t ride much last season.  I rode OK, however, the cool night air on our way back home made my knee ache.

We ate both lunch and dinner at Waldameer.  Lunch was served from 12:00-4:00 PM.  Our lunch choices included carrots and celery sticks, macaroni and potato salads, baked beans, hot dogs, hamburgers and ice cream.  After lunch we wandered about the park.  The only ride we rode this year was the park train.  We rode the train twice.  The first time the train broke down and we had to walk a little ways back to the station. 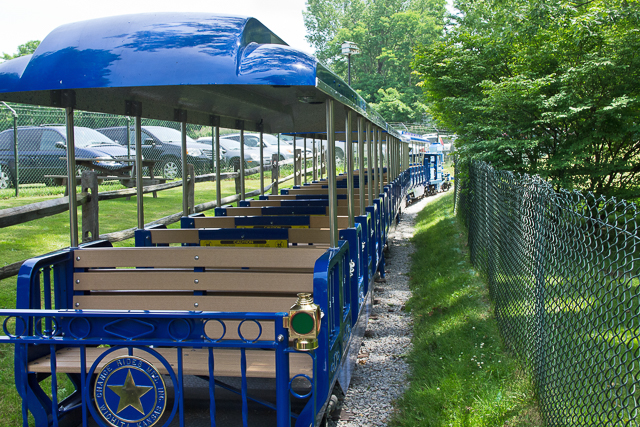 The last time we attended Bob’s company picnic was in 2010.  I noticed some new rides since our last visit. 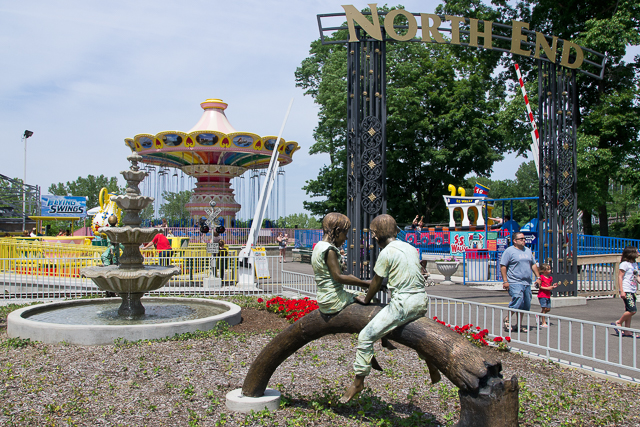 This was the first time I saw North End.
There are a few new rides, as well as new statues and a fountain.

In past years I take lots of pictures of those who attend the picnic.  I took only a few pictures this year.

This is Dave.
He attempted to take a picture of Bob and me, while we were on the park train.

Karen, Jesse and their granddaughter

At 5:30 PM names were drawn for several prizes (only employee and retirees names were included in these drawings).  Bob didn’t win any prizes.  He would have liked to had won the 8 wellness hours to get a day off work.

We played bingo soon after the drawings.  We didn’t win anything playing bingo either, but we did have a good time.

Throughout the day we enjoyed the company of various people, Bob’s coworkers and their spouses (and families).  I was most surprised when I saw Brett Fallon there.  Brett is the owner and Founding/Artistic Director of the Dance Elite* Performance Company.  We recognized each other right away.  I met Brett two years ago at Warren’s Ribfest.  We walked up to each other and expressed surprise at seeing each other at Waldameer.

Brett lives in Erie and stopped by to see Melanie, who had asked Brett to come see her at the picnic because she didn’t think she would know anyone.  Well, Melanie being at the picnic was my second surprise of the day.  I didn’t know that Melanie’s husband worked for the same company as my husband.  I guess he has been there a year, working the second shift, in Bob’s department!  Melanie and I met at Ribfest 2010, as well, the same day I met Brett.  In addition to photographing Brett, while he danced at Ribfest 2010, I photographed Melanie’s two daughters as well.  Melanie is the owner of Starlite Events by Design and Brett’s official manager.  Melanie and I have been Facebook friends since July 2010 and never realized that our husbands worked at the same company!

I have chili simmering on the stove. It smells good in here! 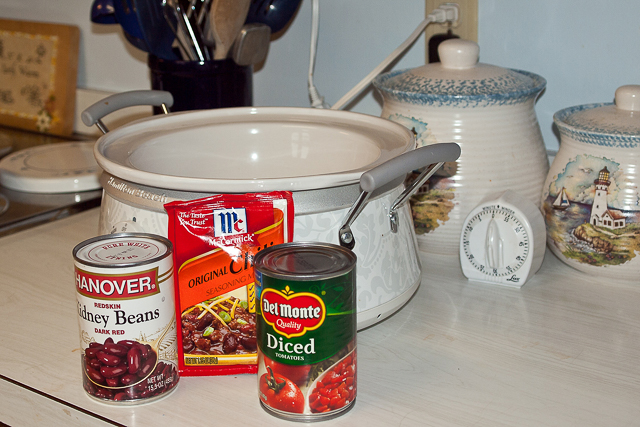 An Empty Crock Pot but not for long

We are having Chili for dinner, which I think is a good meal for a cool, Autumn day.

On Saturday, June 19th, Bob and I attended his company picnic at Waldameer Amusement Park and Water World in Erie, PA.

We left home, via motorcycle, at 10:30 AM. The weatherman was forecasting 50% chance of rain, but we decided to risk getting wet. We didn’t see any rain on our way to Erie, although we did encounter a few wet roads. When we reached Waldameer, we learned that it had rained hard there at 11:00 AM.

After lunch we wandered about the park. Next to our picnic pavilion was the Mega Vortex. This thrill ride was added last year. We didn’t attend the company picnic last year, so this was the first time we had seen the Mega Vortex.

Beginning on the right with the man in the striped shirt, he and the five individuals to his left are friends of ours.

Not far from the Mega Vortex was Dodgems.

We rode two rides — the Wacky Shack and the train.

I took this picture of our friend Roger and his son, Adam, while waiting in line for our turn to ride through the Wacky Shack. The Wacky Shack is a two-story ride. The cars follow along a dark, spooky path.

One of Bob’s coworkers and his family
on board the L. Ruth Express train

We watched Evolution of Dance at Waldameer’s Showtime Theater at 2:00 PM. Undoubtedly, Simon Cowell would have been critical of their performance. Some parts of the performance were good, so I would say that the show was enjoyable. 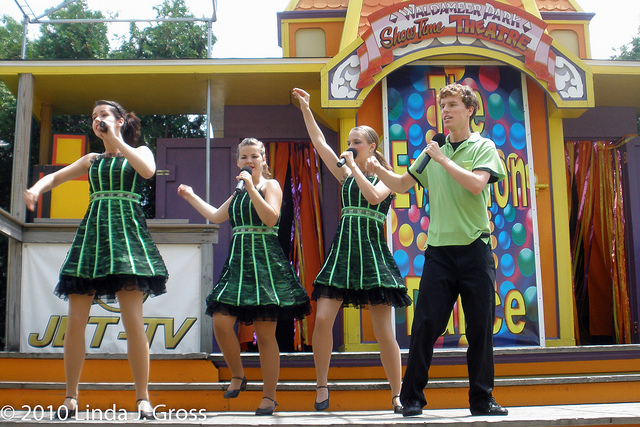 At 5:30 PM names were drawn for several prizes (only employee and retirees names were included in these drawings). Bob didn’t win any prizes. He would have liked to had won the 8 wellness hours to get a day off work.

We played bingo soon after the drawings. We didn’t win anything playing bingo either, but we did have a good time.

Bingo had not yet started.
Our friends’ son, David, is hopeful for a win. 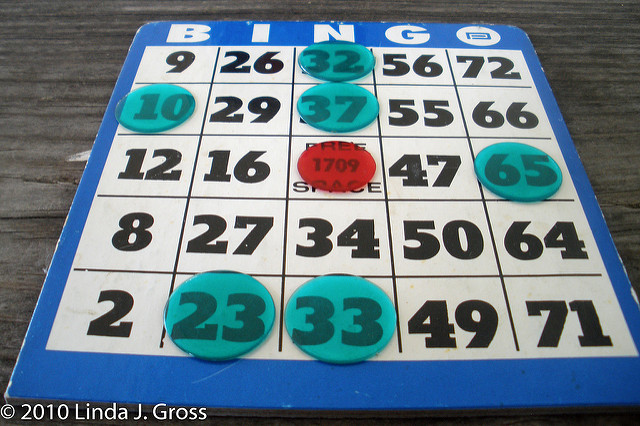 My Bingo card; almost a winner.

Throughout the day we socialized with Bob’s coworkers and their families. Spending time with our friends is the main reason that we attend the company picnic.

We left Waldameer after playing Bingo. We saw the most beautiful cloud formations — HUGE puffy white clouds emerging from horizon against a brilliant blue sky — on our way home.

When we reached Corry, those clouds started to look threatening.

Bob pulled out his Blackberry and checked out the weather. It looked like we might hit some rain on rest of our way home. We put on our rain gear in a parking lot across from Walmart on Rt. 6. It is a good thing that we did, as we did run into some rain on our way home. We returned home around 9:00 PM.

Dinner was ready when Valerie and Michael arrived at our house at 2:00 PM. They brought me a beautiful bouquet of flowers, which I handed to Bob to put in water.

We enjoyed a dinner of spiral ham, scalloped potatoes, green beans, corn pudding and ambrosia. For dessert we had cheesecake, which Valerie and Michael brought with them. Everything was delicious, and everyone got their fill of food.

After dinner we showed Michael and Valerie our Nintendo Wii. Neither of them had ever seen the entertainment system. It surprised them the variety and number of activities that we could do on the Wii. Valerie tried a couple of the games and had fun playing them.

Throughout the afternoon we discussed a variety of subjects, many of which were conducive to becoming better acquainted with each other. As Valerie and Michael left for home (around 6:30 PM), we talked about getting together again soon. Michael and Valerie will have us come to their house for a cook out, and Valerie and I will get together sometime this week to go for a walk at the Audubon Center. I look forward to both activities. 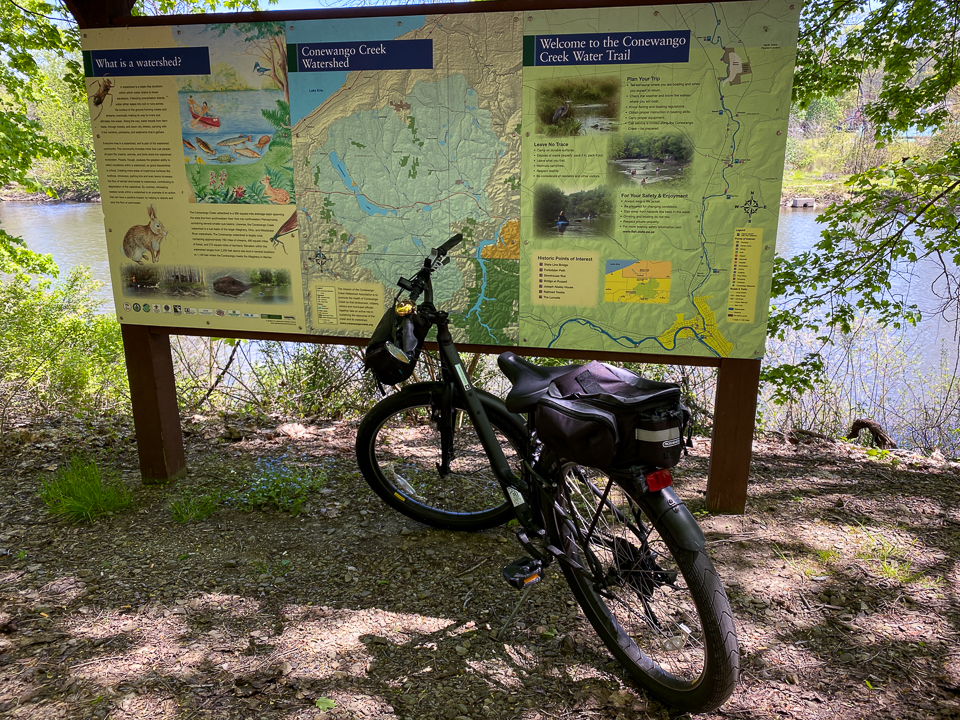