We ate a later than usual breakfast at 8:00 am. No need to hurry today, as the drive to our beach house will take only 4 1/2 hours without stops or any other type of delay. Check in time at the beach house isn’t until 4:00 pm. We have plenty of time for the final leg of our trip to the Outer Banks.

Breakfast was complimentary, in a room off to the side of the lobby.  As is customary at Best Western hotels, a large selection of breakfast items were available to include scrambled eggs, bacon, sausage patties, waffles, cereal, yogurt, pastries, breads, coffee, tea, orange juice, and fresh fruit.

Best Western Fredericksburg lobby was decked out for the Autumn season.

Our Best Western Fredericksburg accommodations were on the second floor.  Sandy and Jim’s room was one door away from our room.  You can see Bob walking toward our room and Sandy standing in the doorway of her room.

We checked out of the hotel, after breakfast. The woman in front of me was asked if her stay was OK. She said that the bed was soft and too high. The hotel clerk apologized. The woman then said that the dogs liked the bed. All three of us laughed.

Leaving the hotel, Jim led the way to the nearby Walmart. The four of us picked up a few supplies that we had forgotten (or purposely left) at home.

Next stop was at the Walmart gas station to fill up.

We stopped and took a walk on Prince Street in Tappahannock, VA.  According to a Wikipedia article, Tappahannock is the oldest town in Essex County, VA.  It is located on the Rappahannock River and is the county seat of Essex County.  Tappahannock’s name comes from an Algonquian language word lappihanne, meaning “Town on the rise and fall of water” or “where the tide ebbs and flows.” In 1608 John Smith landed in Tapphannock but was driven back by the local Native American tribe.

The statue commemorates Tappahannock and Essex County’s native sons who fought and died during the American Civil War.

A building that looked like an old theater caught my eye.  I asked a man approaching us if he was from the area.  When he responded “yes”, I asked what this building was.  The building is the Daw Theater and is in the process of being restored.

Tappahannock is an inviting town.

Before leaving Tappahannock we made a bathroom stop at Sheetz. The stop provided an opportunity to pick up a mid-morning snack too. Bob purchased water and a Slim Jim. I purchased a Diet Coke. My mid-morning snack was the banana that Jim brought to me from the breakfast room, when he and Sandy checked out of the hotel. I wanted a banana, when we ate breakfast. The bowl was empty, though.

We stopped for lunch at McDonald’s in Chesapeake, VA (off route 64). At the time we were approximately 2 hours (89 miles) from our vacation beach house. We were back on the road by 2:15 pm.

We crossed over the NC border at 2:40 pm and arrived at our vacation beach house, Flight of Fantasy, which is located on Pine Island in Corolla NC, at 4:00 pm.

We have a deck with a great view of the ocean.

After depositing our stuff in our bedroom, I helped Denise and others organize the kitchen and then unpacked and put away my clothing.

Later in the day I caught Denise, Brenda and Nancy in the pool area on their way to the beach.

Nancy, Brenda and Denise on their way to the beach

They asked me to join. I declined. Sandy and I did go to the beach a little later. We didn’t put on our swimsuits. I did roll up my jeans and put on water shoes. Sandy put on a pair of crocs.

Sandy on our boardwalk to the beach

Denise and Nancy were sitting in chairs on the beach.  Brenda had gone for a walk on the beach, returning with a bag of shells.

Brenda and her bag of shells

Denise, Nancy and Brenda didn’t stay long, after Sandy and I arrived at the beach, as they were getting cold. Brenda did, though, take a few pictures of Sandy and me before returning to the beach house.

Hooray!  We are on the beach!

Oh, I almost forgot. Denise, Nancy and Brenda put together gift bags for each couple. The gifts bags included Kleenex, a roll of toilet paper, two bags of cracker jacks, two bags of peanuts, two Slim Jims, playing cards, two small flashlights, a 4×6 photo frame (Denise wants me to take a picture of everyone. She wants to have 4×6 prints made and give to each couple before we leave to go home.), a large squirt gun, a bag in which to collect seashells, a flip-flop bottle opener, liquid hand soap, a bottle of Poo-Pourri Before-You-Go Toilet Spray and a beach towel.

Sandy, Jim, Bob and I watched a beautiful sunset this evening from the front side Currituck Sound balcony.

Tonight’s dinner was pizza and homemade cake (sweet potato cake). After dinner Denise, Sandy and I chatted with each other for quite a while.

Lots of people are sharing our vacation beach house.  Here are the couples who have arrived so far:

Still to arrive are:

We are keeping an eye on Hurricane Maria. A tropical storm watch was issued at 5:15 pm today for Corolla. Wind is forecast at 30-40 mph with gusts to 55 mph. The window for tropical storm force winds is Tuesday morning until Wednesday evening.

Bob and I and Jim and Sandy came up to bed around 9:30 pm.  Michael and Maggie arrived sometime after we had retired to our room.

Our Outer Banks vacation got started at 12:15 pm on Friday, September 13.  Bob came home from work at noon.  Fifteen minutes later we were on our way to pick up Pam, who accompanied us to the Outer Banks this year.  Our friend, Denise, who coordinated the plans for our week stay in the Outer Banks, graduated high school with Pam.  Pam and Denise were best friends in high school.  They lost touch after high school and found each other recently on Facebook.  Bob and I had not met Pam until we picked her up for our drive to the Outer Banks.  I had been corresponding with Pam, though, on Facebook.

It was a good travel day.  Traffic wasn’t bad.  What traffic there was kept moving.   The steady conversation among Pam, Bob and I made the 6+-hour drive go by more quickly than otherwise.

We spent the night at the Best Western Fredericksburg in Fredericksburg, Virginia.  We arrived at the hotel around 7:15 PM.  Bob and I stayed at this hotel last year, on our way to the Outer Banks.  It is a very nice hotel, and we had no qualms about staying there again.  This year, however, we requested two rooms that were not in “pet alley”.  The Best Western Fredericksburg allows pets.  Last year we were accommodated in a room in “pet alley”.  Although we enjoyed a quiet night’s rest last year, we were awakened the next morning around 5:30 AM  by barking dog(s).

We checked into our rooms and ate dinner at Shoney’s Restaurant, which was located on the hotel grounds.  We returned to the hotel at 8:30 PM and spent the rest of the evening in our respective rooms.

Neither Bob nor I got much sleep from 2:15 AM and on.  Both of us experienced irritable bowels.  We thought perhaps it was something that we ate at Shoney’s that didn’t agree with us, although everything tasted good.  When we met Pam for breakfast, we learned that she experienced an irritable bowel during the night as well.  The common food all three of us ate was Tilapia, so we blame the fish for our distress.

We ate breakfast at the hotel.  As always, Best Western’s complimentary breakfasts are good and filling.  We checked out of the hotel after breakfast and were on the road en route Nags Head, NC by 8:30 AM.   We made one photo stop along the way, in Tappahannock, VA.

Motorcyclists were gathering for a poker run, when we arrived in Tappahannock.

All proceeds from the poker run would be donated to Special Olympics, according to one motorcyclist to whom I inquired what was going on.

We arrived at A Whale’s Head Inn around 3:30 PM.  Denise arrived about an hour after we did.  Accompanying Denise were the other five people who would be vacationing with us for the week.  Denise’s two adult children and a friend arrived a little later.  The three young people spent one night with us.

Bob and I went for a walk on the beach that evening, as the sun was setting. 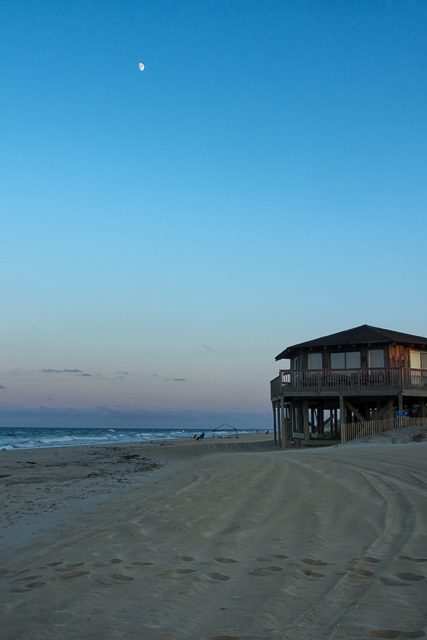 The sun had almost slipped below the horizon when we returned from our walk on the beach.  This photograph of the setting sun was taken through the stilts of our beach house.

The highlights of our vacation included:

– a brief stop in Tappahannock, Virginia;

– soaking up the sun and warmth on the oceanfront while in Virginia Beach, Virginia;

– driving over the Chesapeake Bay Bridge-Tunnel; and

– visiting Assateague Island, Virginia, on our way back home.

Here is a slideshow with photographs of the highlights of our vacation.

I want to mention one other vacation highlight, one not so pleasant. En route Virginia Beach we spent one night at the Best Western Lee-Jackson Inn in Winchester, Virginia. The AC receptacles in our room were worn to the point that anything plugged into them would simply fall out, without even a nudge. That night my husband emailed Best Western International in regards these AC receptacles, stating that they might be considered a hazard in some locations. The next morning, after showering, I plug in the hotel’s hair dryer …

BOOM
A FLASH OF LIGHT 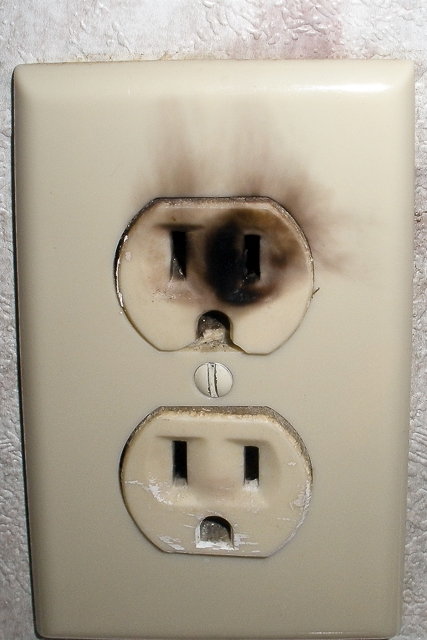 The hairdryer shorted out when I attempted to blow dry my hair.

I went to the hotel lobby and asked the desk clerk if he had a hair dryer that I could borrow. The desk clerk makes a joke out of my question by looking in his pockets for a hair dryer. I told the desk clerk that this was not a laughing matter. I turned on my camera and showed him the photograph displayed above. His manner changed at that point. He found me another room, where I could use the hair dryer to dry my hair. He was very apologetic. I didn’t allow the story to end here. We hung around until the office manager showed up at 8:00 AM. I related my story to the office manager. We received our money back for the night’s stay.