Our almost 7-month-old granddaughter, June, spent Friday night (December 14th) with us.  June’s visit went extremely well.  She was bathed, in her sleeper, fed and in bed by 5;30 pm.  June cried for only a short time before she fell asleep.  She slept pretty much through the night, awakening around 5:45 am the next day.  We enjoyed having June sleep over at our house and look forward to Harper sleeping over in the near future.

Stacey, Mike and Harper arrived at our house around 8:15 am.  The six of us left home shortly thereafter, en route Sprague’s Maple Farms Restaurant in Portville, NY.  Looking at the map shown below, you will see that Sprague’s Maple Farms is quite a distance from our home. The excellent food, great service and total ambiance found at Sprague’s is definitely worth the ride.  Moreover, breakfast at Sprague’s has become a Christmas tradition for our family. Our tradition began in 2007.  We have missed only one year, 2008, since then.  Breakfast at Sprague’s is something that we look forward to each year.

After a delicious and hearty breakfast Stacey, Mike and the girls began their drive back home, while Bob and I drove an additional hour north to Letchworth State Park.

Bob and I have visited Letchworth State Park numerous times.  Our last visit, though, was in July 2008.  It was time for another visit!  The park, often referred to as the “Grand Canyon of the East”, is a spectacular place.  The park’s magnificent scenery includes waterfalls (three major ones on the Genesee River) and a gorge.    We entered the park from the Portageville entrance and drove north along Park Road.   I discovered shortly before arriving at Letchworth State Park that, although I had my digital SLR, I had failed to bring a memory card with me.  We made a few stops on our drive through the park.  All photographs were taken with my iPhone camera. 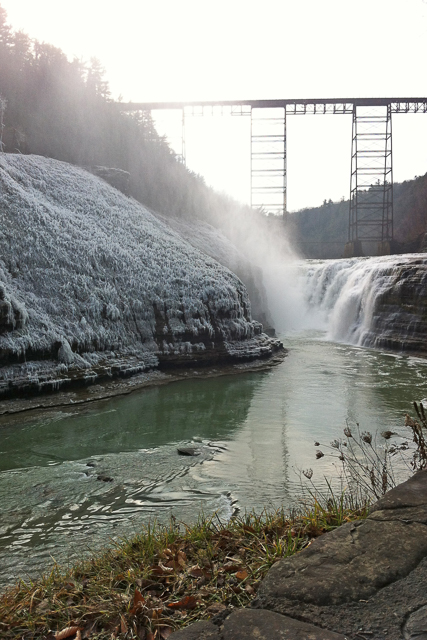 We left Letchworth State Park at its north end, at the Mount Morris exit.  We told the GPS to take us home.  The GPS took us home a different way thanwe were accustomed.  Our normal route home takes us along the western side of the park.  The GPS took us home along the eastern side of the park.  The new route home resulted in our discovery of Stony Brook State Park, near Dansville, NY (letter “B” on the map shown below).

According to its website, Stony Brook State Park’s terrain is hilly with lots of woods.  There is a deep gorge with rugged cliffs that overlook three waterfalls.  We saw one of the waterfalls.  The other two were on a trail that was closed for the season.

This used to be the Stony Brook park swimming pool.  State budget restraints have kept the swimming pool closed for the past 3 years, according to a Dansville Online news article.

Bob and I hope to return to both Letchworth and Stony Brook state parks sometime in the new year.

2 Responses to “A Sleep Over, Breakfast at Sprague’s and Two State Parks”