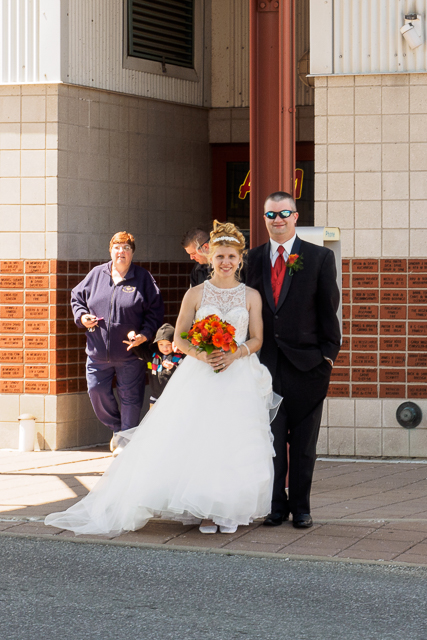 Bride and Groom at Dobbins Landing

Bob and I were at Dobbins Landing in Erie, PA on the afternoon of Saturday, June 6th. I snapped the picture shown above of this lovely bride and handsome groom, while there. Someone asked if the picture would be placed on Facebook. I answered “yes”. Having no way to find this couple on my own, I posted the photograph on a local News/Media Facebook page on Thursday, June 11th, at 1:05 pm.  I requested fans of that page to share the photograph. I wondered how long it would take until this newly married couple would be found.

On Monday, June 15, at approximately 2:50 pm Mary K. left the comment “I know the groom’s Grandma”. Mary and I conversed briefly with each other.  I learned that the groom’s grandma is not on Facebook, but Mary will share the picture with her.

At approximately 8:50 pm, Nicole S. left the comment “I know the Groom’s mom. I shared the pic with her. The pic made it’s way to the couple and Groom’s mom all the way to Butler, Pa! The Groom’s mom says thank you for the beautiful pic!”

At approximately 9:30 pm the groom’s mother, Kathy S. left the following comment: “ Thank you so much Linda! The pic is great and the kids will love it.”

So, in a little more than 4 days this newly married couple was found.  Isn’t the power of social media impressive!

Matt and Rachele, I wish the two of you many years of happiness!

2 Responses to “The Power of Social Media”