As I wrote in yesterday’s blog post, we spent the past weekend in Erie, PA.

We went to bed early Friday night. We were sleeping by 9:00 pm. You know what that means, right? Yes, we were up very early Saturday morning.  By 6:40 am we had read the online edition of the Warren Times Observer newspaper, had taken our showers and gotten dressed, and had eaten breakfast. Breakfast was complimentary at our hotel and included eggs, sausage patties, waffles for Bob and a cinnamon raisin bagel with cream cheese and a banana for me.

At 6:40 am we departed the hotel en route the North Pier at Presque Isle State Park. We hoped to see the sunrise at 7:41 am. 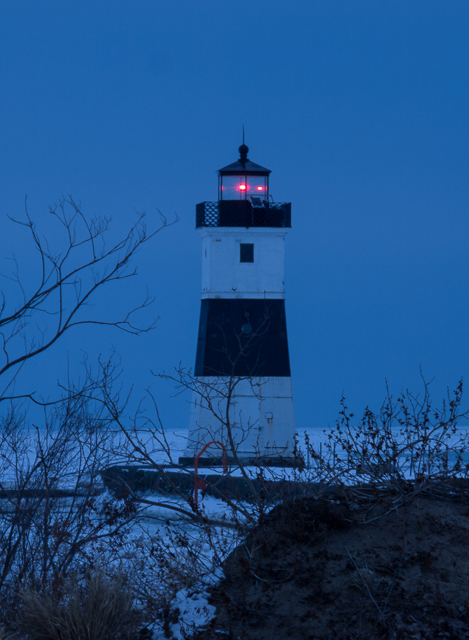 As you can tell by the picture displayed above, the sun did not make an appearance. It was a cold blue type of morning. The only thing to show any kind of warmth was the lighthouse’s red beacon. Although we didn’t get to see a beautiful sunrise, as anticipated, we didn’t feel the drive to the North Pier was a waste of time. This morning was the first time either Bob or I had seen the North Pier Lighthouse’s light flashing.  We also met a very nice man named Dean Zeller, while at the North Pier.  Dean is a photographer too. He showed us a few photographs of a snowy owl that he had taken earlier in the month. Dean gave us pointers on where we might spot a snowy owl.  While talking with Dean, I learned that he is a member of the Photoholics Anonymous Facebook group, of which I am a member as well. Dean is now my friend on Facebook.  Dean is a wonderful photographer.  You may see some of his photography by clicking here.

We returned to Presque Isle State Park in the afternoon, after spending a few hours indoors shopping and eating lunch at The Outback restaurant.

In addition to hitting our usual stops, we discovered the West Pier.  The West Pier is the location of the Presque Isle Marina. I look forward to seeing this area again in warmer weather, when the boats are moored at the marina. On Saturday we watched two individuals windsurfing on ice. 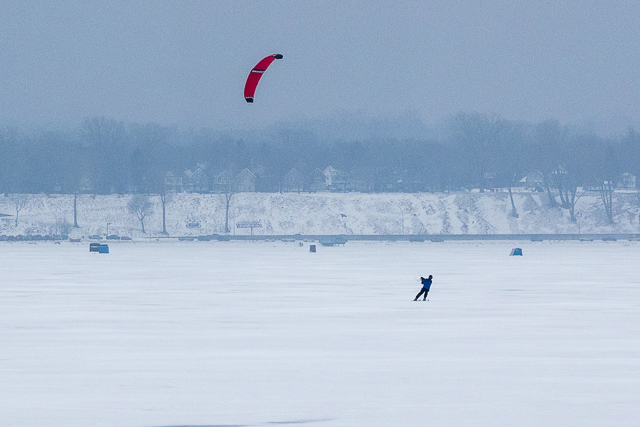 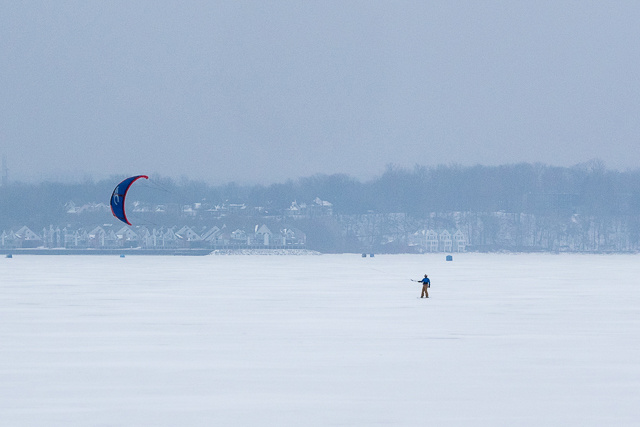 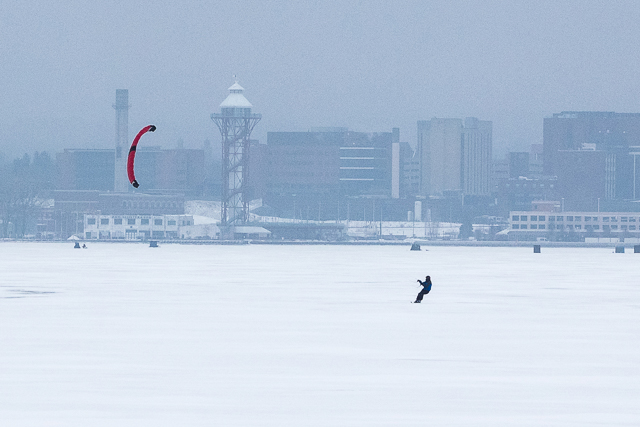 There is a good view of Dobbins Landing from the West Pier area.

It was not the best of days to be outside. It was windy and cold; there was a dampness to the air too. We didn’t see the sun today, which was quite a change from yesterday when there was abundant sunshine. We didn’t see a snowy owl either.  We returned to the hotel around 4:00 pm, around the same time as freezing rain began to hit the Erie area. Not wanting to be outdoors and on the roads in freezing rain, we stayed indoors rest of the afternoon and evening.